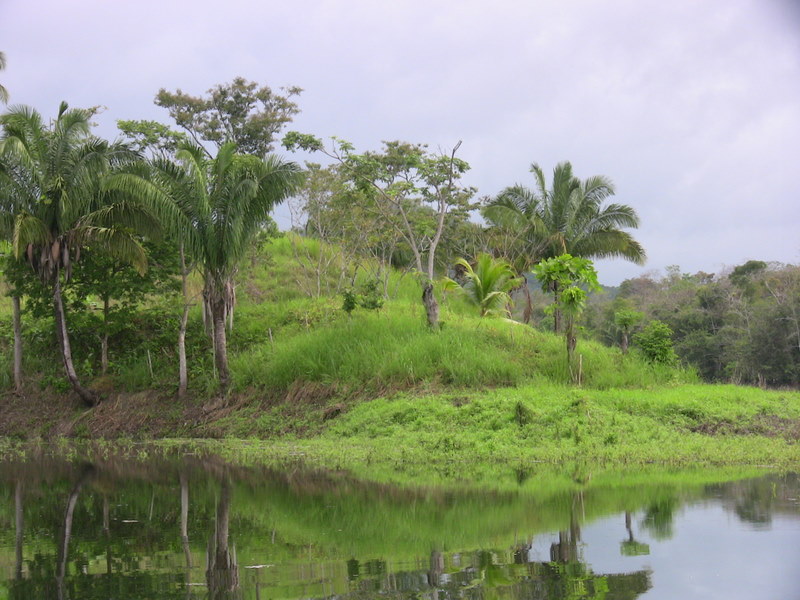 What an awesome day! (See pictures at the end of this post.) This morning, after breakfast, we were picked up at our hotel by Anne, who was raised in Seattle, but has married into an indigenous Indian tribe in Panama who call themselves “Embera“. We took a one hour drive through lush tropical jungle, and then rode in a canoe (powered by a motor) for about another 30 minutes to their village. The canoe ride was breathtaking! We saw a number of birds including herons, hawks, osprey, egrets, and many others I couldn’t identify.

The people in the village were very friendly. As soon as the canoe landed, several girls Emily and Marie’s age came to greet them, and remove their life jackets. They held their hands and walked with them to the village. Our girls didn’t quite know what to think at first, but the children in the village were so hospitable. They picked fresh hibiscus to put in the girls’ hair. At first, just one or two, then they covered their whole head with them! It was really cute. They kids ran around and played quite a bit together.

We were greeted with a rhythmic song played by a quintet of hand-made instruments including a bamboo flute, some drums and other instruments. After learning a little more about their culture, how these people live, work, and eat, we had a lunch they made for us of fried fish and plantains. It was delicious! Emily liked the fish because she said it tasted like salt. :)

After lunch, we took a short hike and learned about the medicinal uses of many of the plants in the area. We got to chew on some roots that almost immediately (and powerfully) numb your mouth – a natural anesthetic – and learned about uses of some other plants, including everything from healing open wounds and venomous snake bites, to increasing fertility and sex drive, or even birth control. (I wonder what affect all the women being topless has on this.)

There are about 110 people living in the village, including children, and they live a very simple life. There is no electricity. They do now have a clean water supply, however, from a filtration system installed by the peace core. Their houses are built with palm trees and branches, and must be rebuilt every 5-6 years.

They weave beautiful baskets, some of them so tight they can even hold water, and many carve intricate statues out of wood, which they sell to tourists. We actually bought one of a toucan we really liked. Not sure how we’ll get it home yet… looks like shipping to the US is a little more difficult than we thought (takes three layers of packaging, etc.). I know you’re supposed to wait until the end of your trip to buy souvenirs, but what can I say? We both liked it. And it’s rare we both see something we really like. In fact, we hesitated to buy anything in Japan, and by the time we got home, we realized we didn’t buy a single souvenir. Oh well, I guess I have enough there from my mission anyway. :)

Spending time with the Embera was truly a remarkable experience. They really seem to have an ideal lifestyle, in the areas that really matter. Their community is strong, and they help each other and their neighbors. Kids run free in the village and learn much on their own, but everyone is also watching out for them (but not stepping in for them). Their kids are tough, too. Six and seven year olds take take care of babies, and even younger kids climb up narrow wooden ladders and are quite independent. I saw a lot of smiles and laugher from these people, and have never met any people so welcoming. I want to be more like them.

When we got back to our hotel, we freshened ourselves up a bit, and then went to the Albrook Mall, which surprisingly, was very similar to malls in the US. Think of Southtowne Mall in Sandy, Utah, but 2-3 times as large. There was also a large carousel that the girls rode on twice, and loved. We had dinner there, and ice cream afterward. Then we walked around to see the shops (although I don’t recall going in any), and took pictures with some of the giant animal statues they had around the mall.

It was a very fun and fulfilling day. The weather was perfect as well. Maybe I’m just getting used to it, but I didn’t ever feel too “hot”. It also rained a bit this morning, which was nice. I thought many times today while looking out at the green foliage, “I can’t believe I’m here in this beautiful place, doing this! It’s incredible!”