The Nostalgia of Coming Home

We’ve made five visits back to Utah since we moved away six years ago, and our most recent stay was the longest and best yet!

There are always an abundance of emotions to process for our traveling family surrounding the idea of “coming home”. What does that actually mean anyway? For us, amid all the places we’ve lived these past several years and with everything we’ve experienced, home is where we feel accepted, respected, supported, and loved. Coming home marks a return to those types of conditions. We’ve found it, to differing degrees, in many places around the world, in the presence of several new friends.

It’s especially comforting to feel those connections among the individuals with whom we share an intimate past history of home, such as our parents, siblings, and grandparents, most of whom live in Utah. We truly felt those coming home sensations during this three week visit with all of those special people. The process of becoming more integrated and whole in those relationships, allows us to be more fully at home within ourselves, no matter where we happen to be journeying around the globe.

First off this trip, we stayed with Brandon’s sister Ashley, her husband Casey, and daughter Kennedy in their beautiful new home in Sandy. We spent many dinners together, some in and some out (like at Blue Lemon and Taqueria 27), we played the Wii, and we watched a couple movies. We also had an extended family get-together at their house one night with grandparents and cousins. We enjoyed visiting with Casey’s sister Emily, who works as a flight attendant. She keeps a car at the SLC airport, which she let us borrow during our stay. Renting a car would have been over $700, and we very much appreciated her kindness! 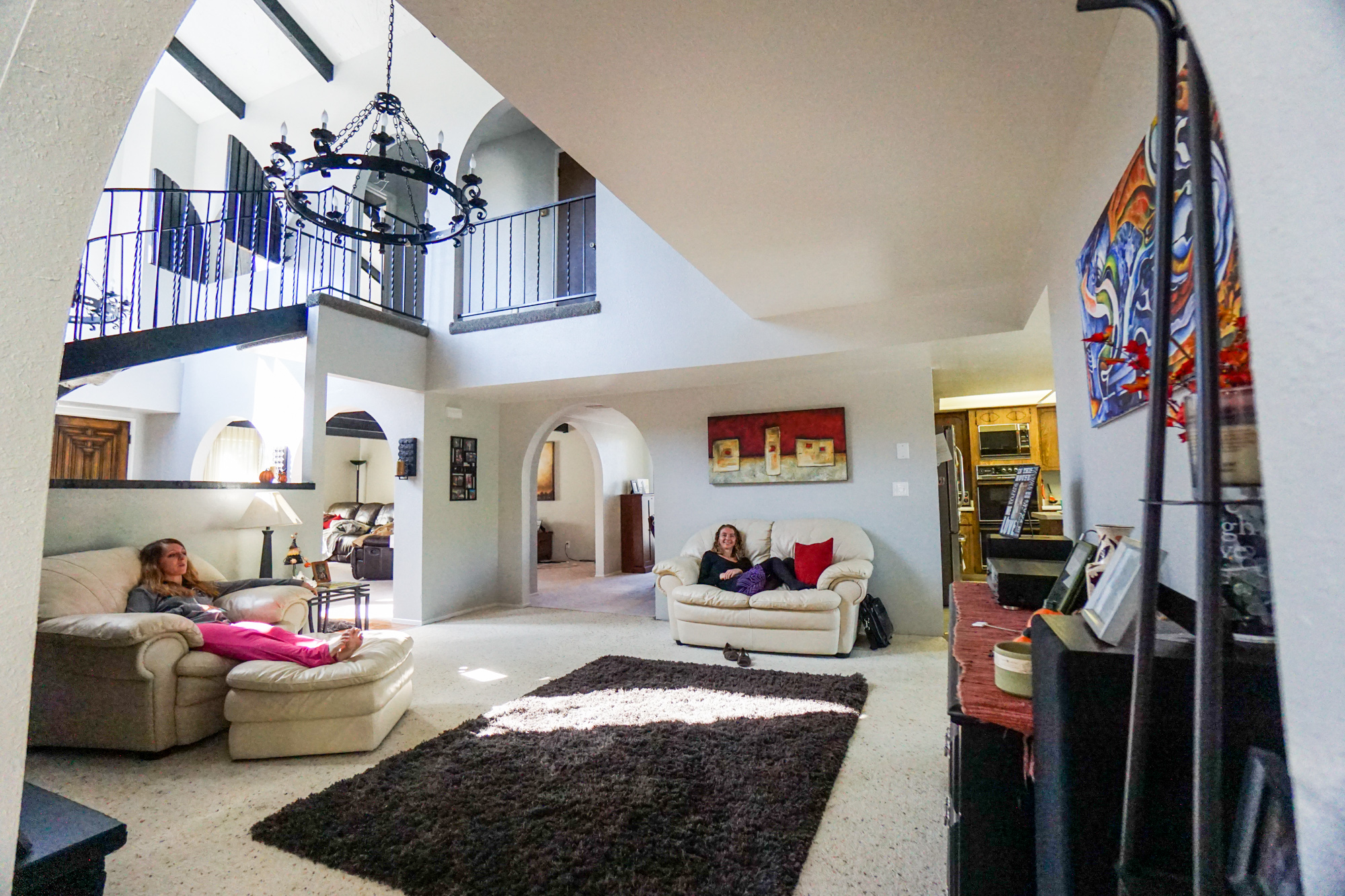 We spent a lovely weekend with my parents, Don and Michelle, at their new home in Midway, Utah. What a breathtaking landscape! 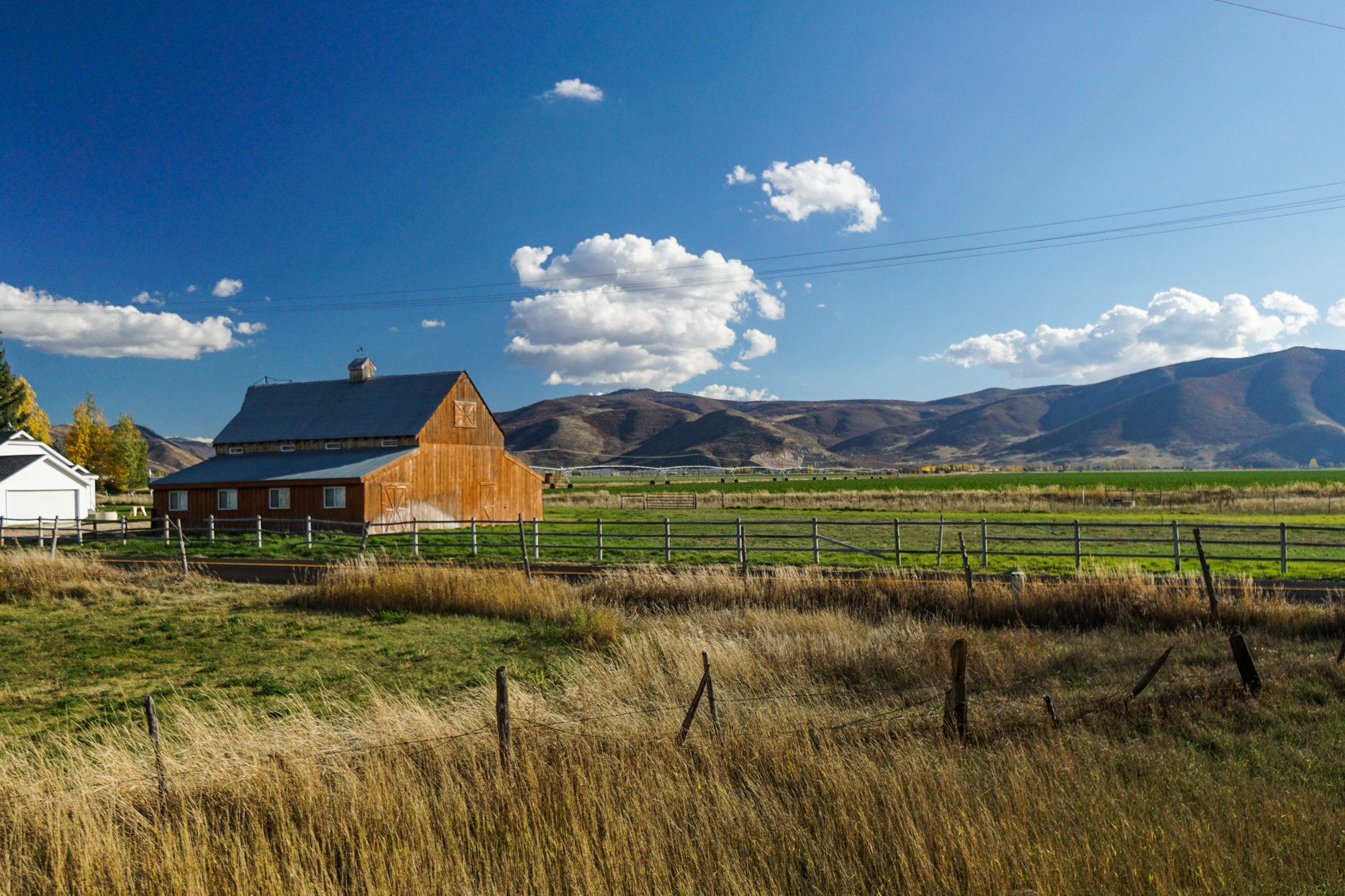 They took us on a Halloween themed train ride on the Heber Valley Railroad, where each of us got a pumpkin we carved together the next day. 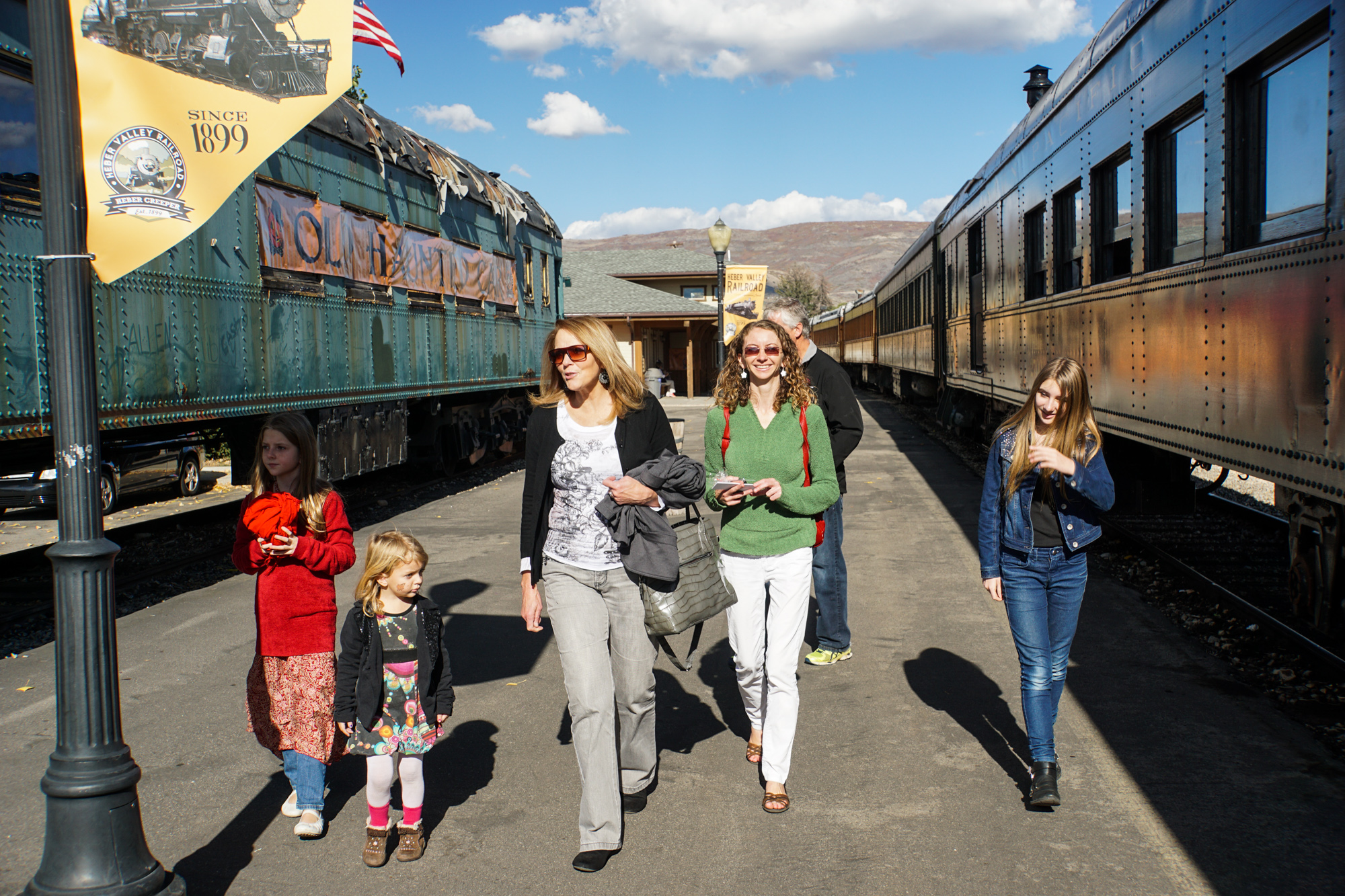 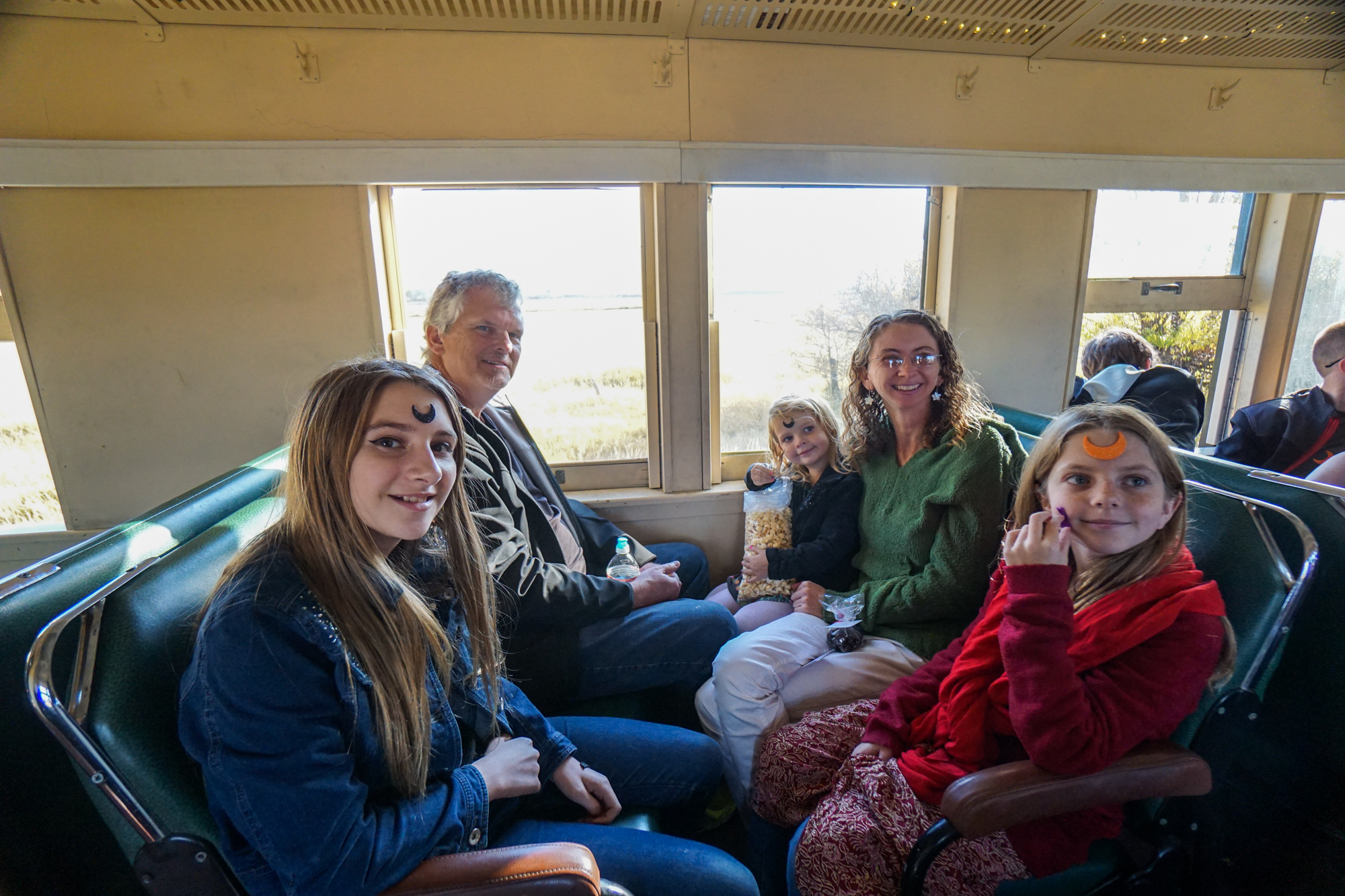 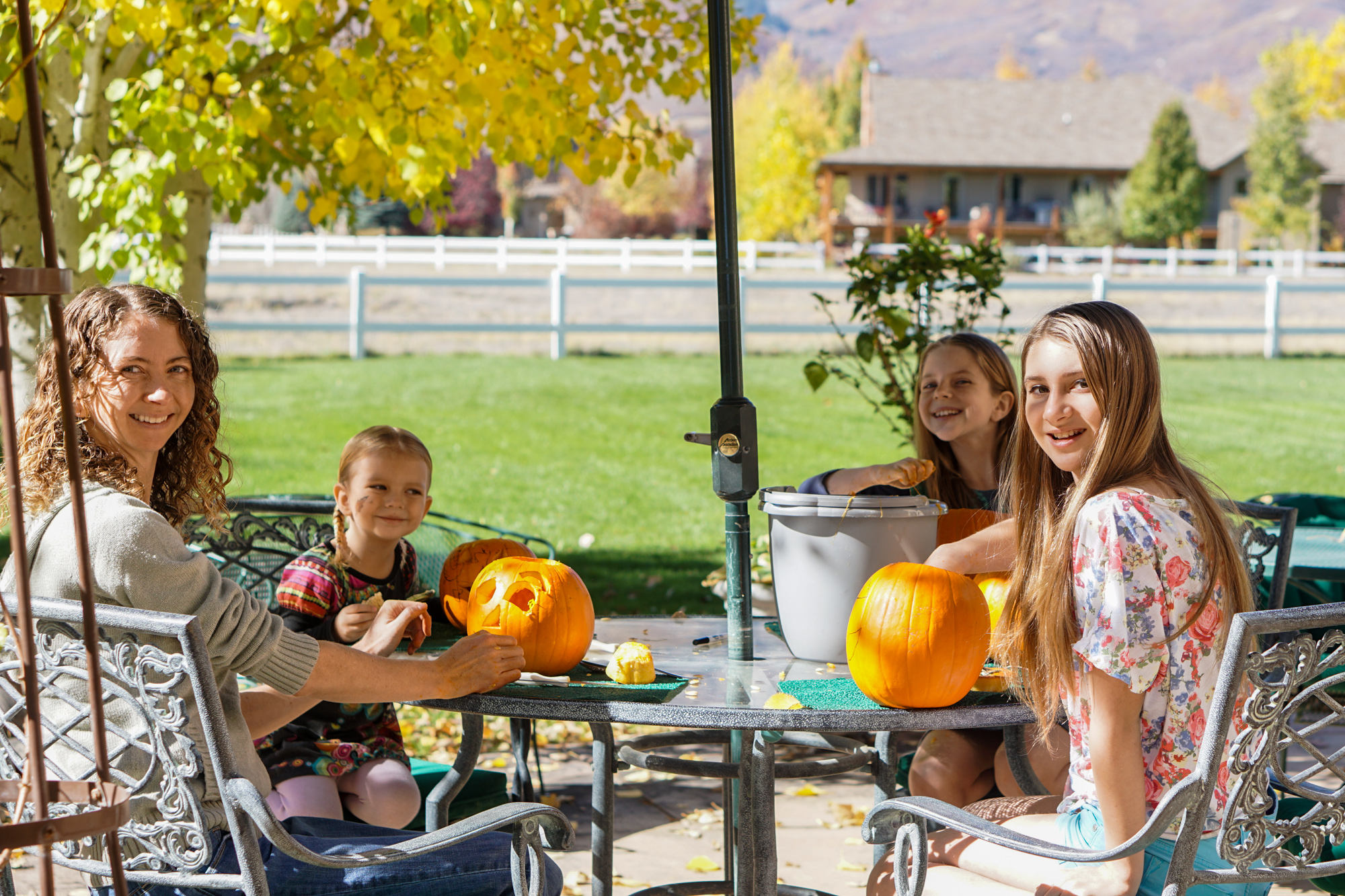 During our weekend we enjoyed many soaks and chats in their fancy new hot tub, ate lots of delicious home cooked food, made chocolate chip cookies with Grandpa Don, and indulged in some Aggie Ice Cream and cheese curds at the Heber Valley Artisan Cheese Shop. We were also honored to accompany them on a visit to their newest grandson, who was only one day old! 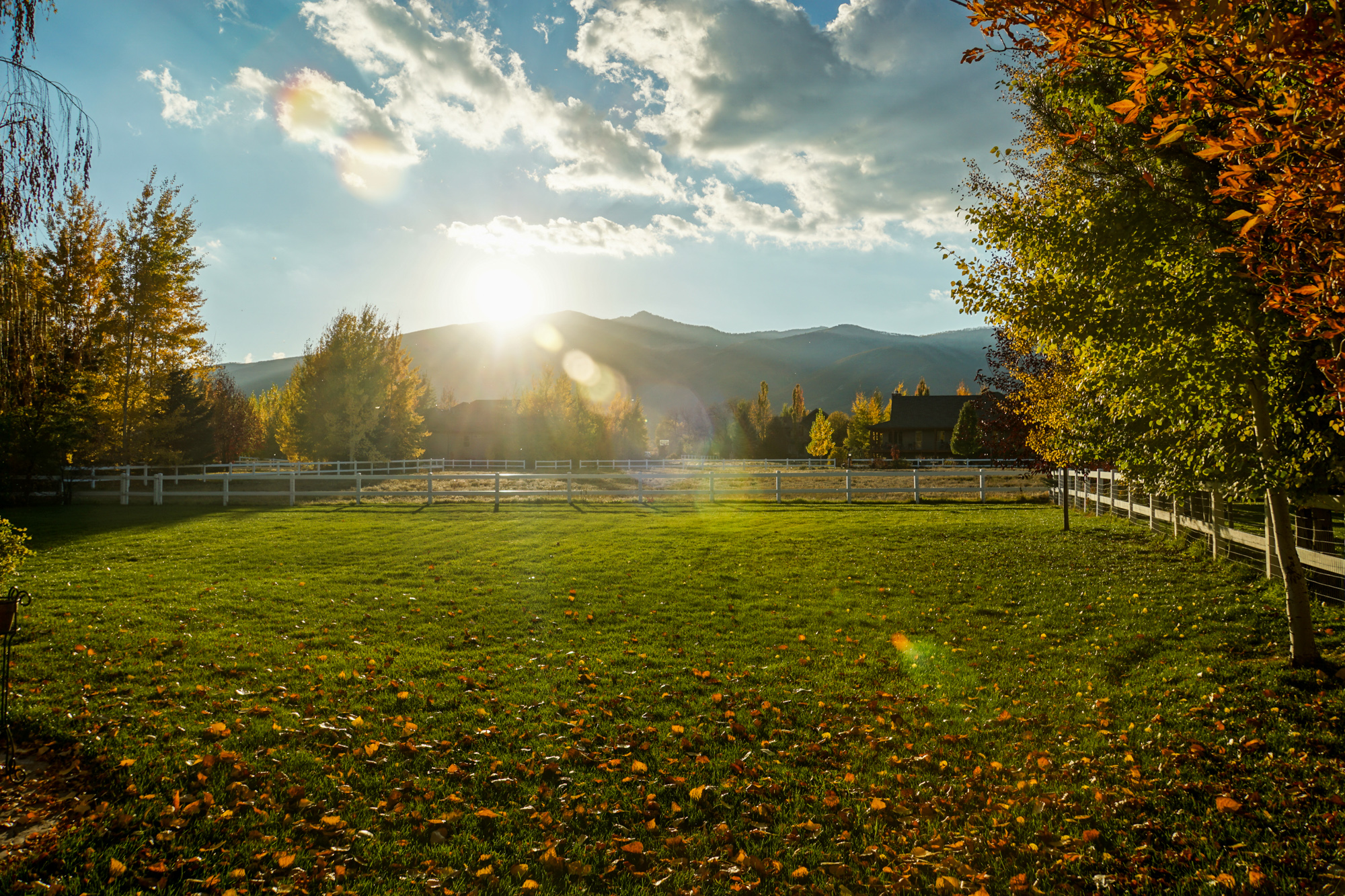 We were invited to a couple dinners at the home of Mark and Robin, Brandon’s parents, which we really enjoyed. It was so nice to spend that time with their family. We missed seeing John, who is currently serving a church mission in Malaysia. 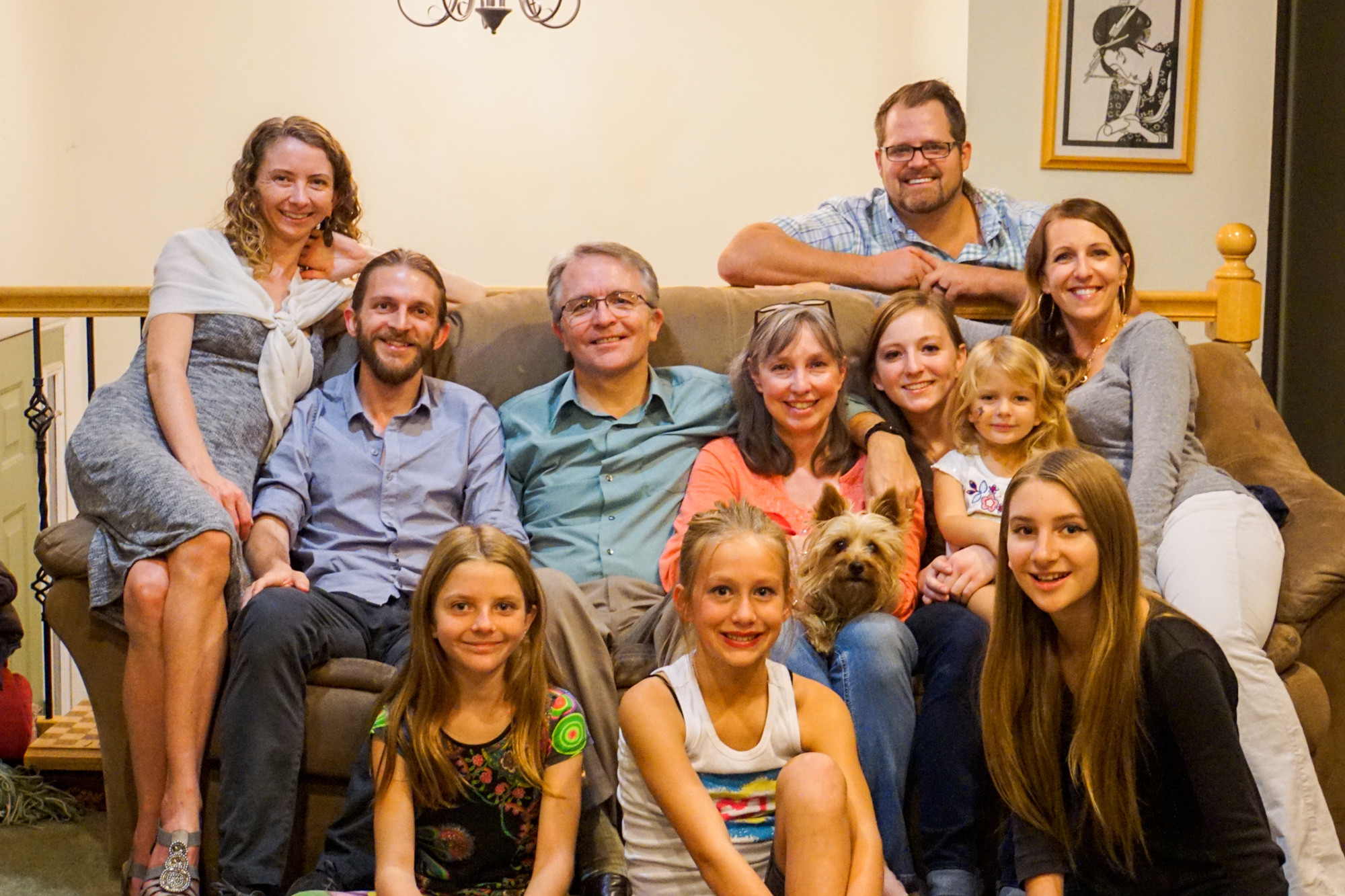 One night we even went with Ashley’s family to the Sandy Arts Guild production of Into the Woods, with Mark as the musical director. The performance was really well done, and we were so glad for the opportunity to attend! 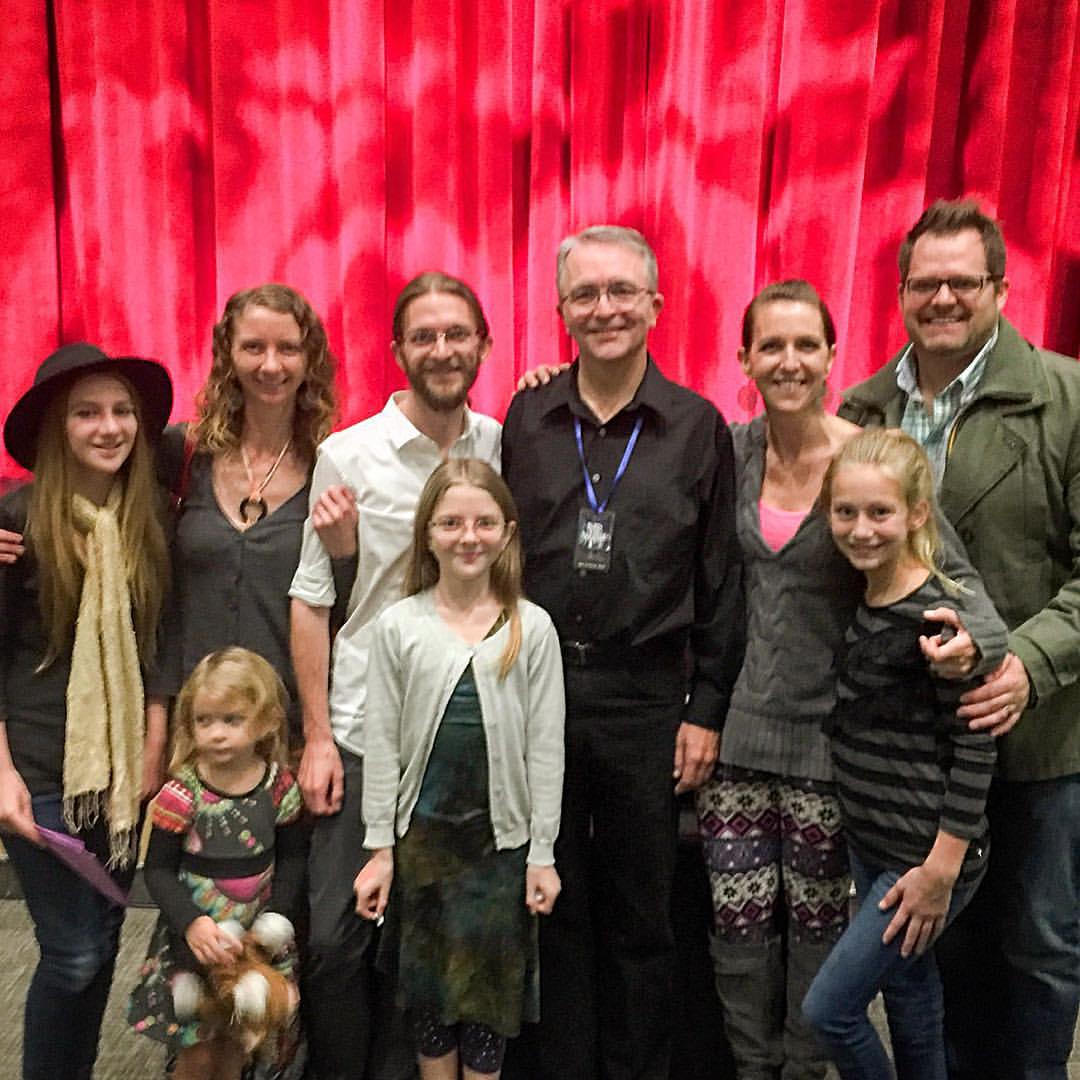 We saw their family one last time on Halloween night when they visited us to see the girls’ costumes. They even brought Matt with them! We haven’t seen him for a couple of years, since before his church mission to Taiwan, which he recently completed.

Brandon’s Grandma Renee and Grandpa Bart invited us to dinner at their house one night, where they had the girls do a little talent show for them and afterwards served some really cute decorated Halloween cookies for dessert. We really enjoyed our visit with them.

We were invited to dinner with my brother Ryan’s family at their new home. We met their newest family member, Porter, who was nine months old. What a fun and happy little guy! I had a hard time pulling myself away when it was time to leave, such a sweetie. Their daughter Phoebe has a really connecting and nurturing personality, and she’s an adorable big sister. We sure enjoyed our visit with their family.

We had a nice dinner one night with my brother Shaun’s family at their new house. It seems that almost everyone had a new house during our visit! We all experienced a fantastic evening together. Emily played us a few songs on her guitar. Aysia sang and danced. Sophie danced and showed us her flexibility. Ethan showed us his breakdancing. Marie showed us her juggling. And, Emmett even showed us some of his cool dancing moves as well!

Beyond family visits, we thought we’d check out the alternative education scene, and spent an afternoon at a Halloween themed unschooling potluck at Sugarhouse Park. Lots of people came dressed in their Halloween costumes, including our girls, and somehow we even managed to take a partial group photo! 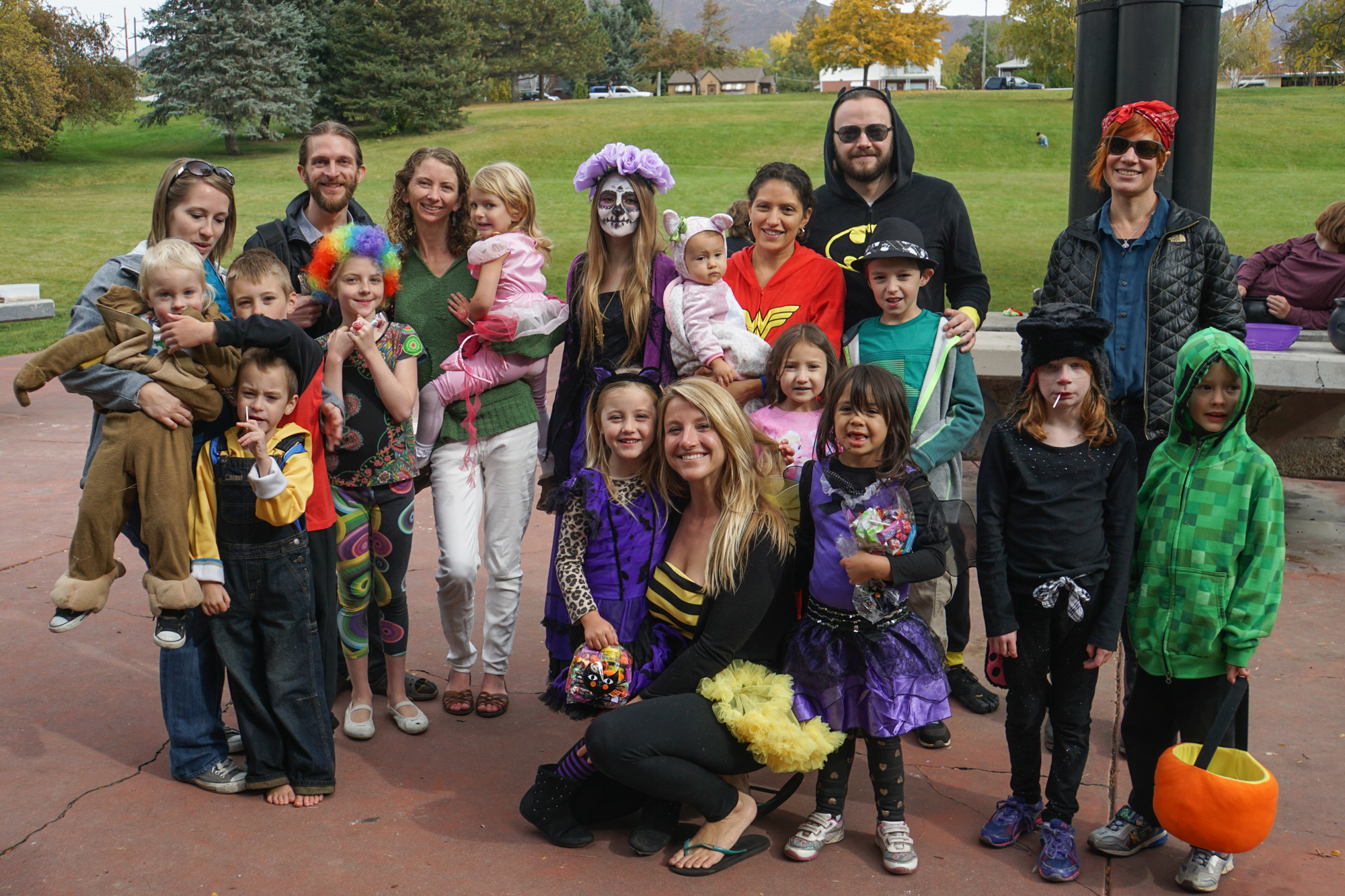 In other news, we spent many hours at a recording studio with Emily, as she began working on some professional recordings of a few of her remarkable songs. She recorded Courageous, See You Again, and BFF. We admired and were amazed at the energy and enthusiasm she put into her studio work. She was clearly having a blast, and obviously in her element. Courageous is now up for purchase on CD Baby, and more will be coming soon! 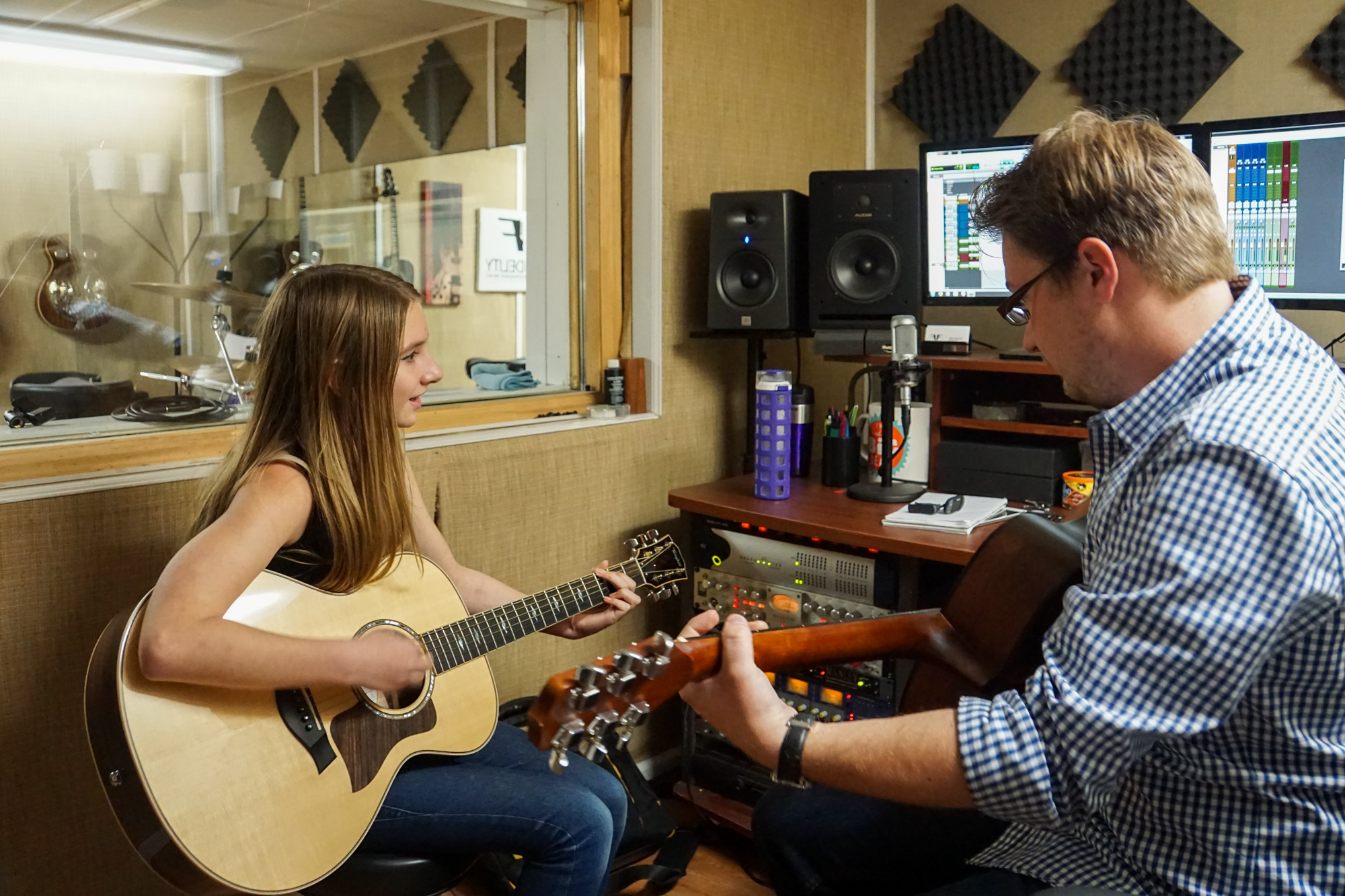 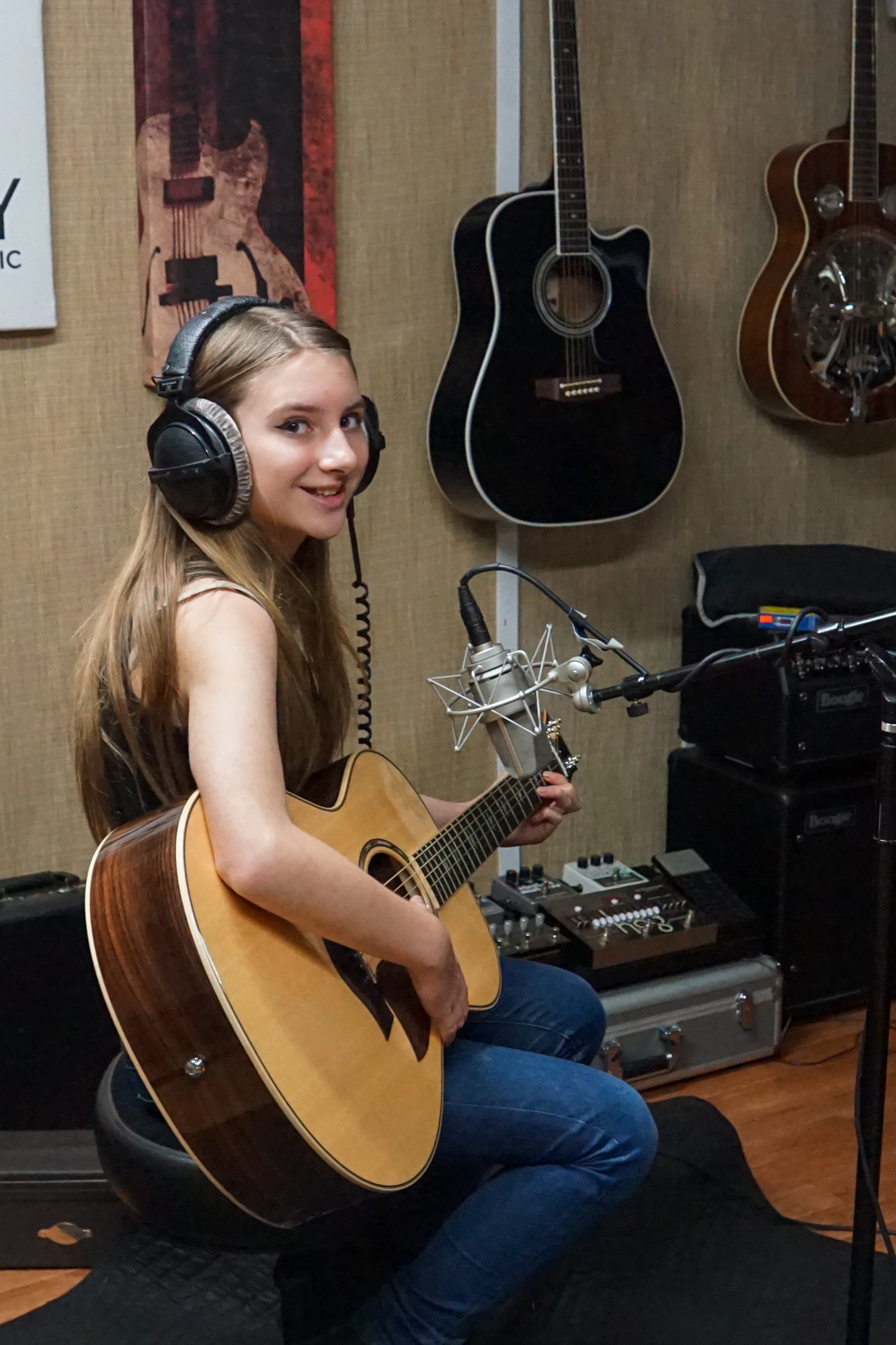 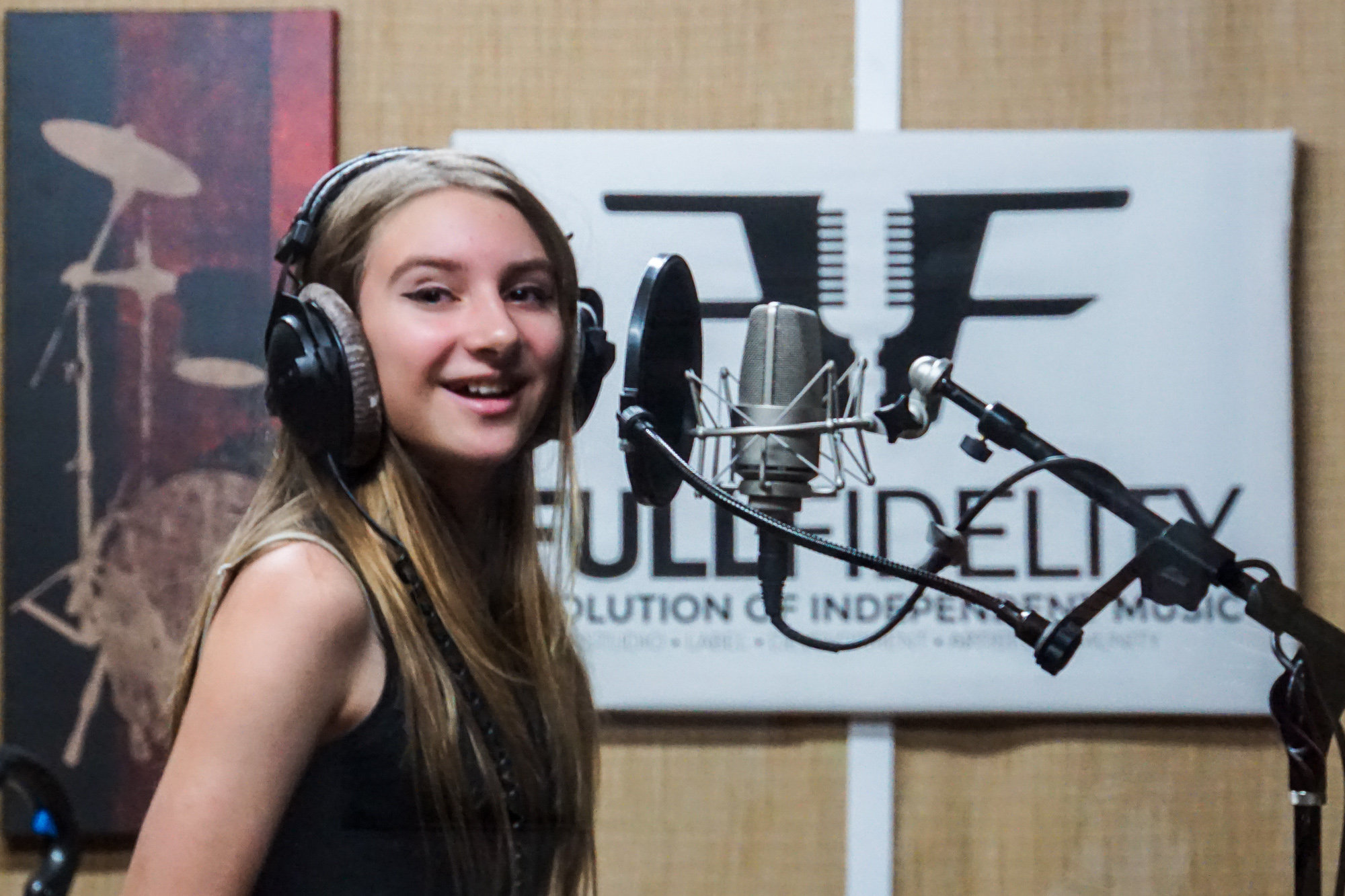 Here are some clips of Emily recording a couple of her songs:

We also spent quite a bit of time going through storage items, which Ashley’s family has been very generously keeping at their house for us – things we haven’t examined since we began our travels. We did some reorganizing and decided what we want to still keep at this point, what to give away, and what to sell. I went through the whole gamut of emotions during this process. Some things got torn up and/or thrown away (with a few choice words thrown into the mix), while others were met with tender tears and loving regard. We went through lots of old photos, artwork, cards, letters, journals, mementos, documents, jewelry, decorations, etc. There have been many changes in our perspectives these past several years! This was one of the many nostalgic experiences we had during our visit.

Another example would be when Brandon and I stayed at Castle Creek Inn, luxuriating in the same room as on our wedding night, the Romeo and Juliet suite. Talk about surreal! It was astonishing to muse over that event thirteen years ago and review everything that’s happened in our lives, family, and relationship since then. As memorable as our first stay was, this second one definitely took the cake!

On that sweet note, while we were in Utah, I also delighted in some treats I haven’t had in ages. For example, cinnamon bears took me back to memories at my Grandma Mitchell’s house, where she always kept a plentiful supply. I also reminisced over Keebler elf sandwich cookies and herbal tea, which reminded me of late-night teatime talks with my Mom, where we nibbled, dipped, and sipped together in the dainty front room of my childhood home.

Speaking of nostalgia, Brandon and I attended the LDS Church meetings one Sunday, for the first time in almost five years. We were curious to see how the experience would feel now, and what emotions and thoughts it would trigger. Ironically, the lesson in Relief Society was about reaching out to those who have gone “astray”, meaning those who have separated themselves from the church, and I couldn’t help but be excited to share my thoughts.

What took me pleasantly by surprise was a few of the other comments expressed were along the same lines as mine! It gave me hope that relations between faithful, active members and inactive or former Mormons are improving and will continue to do so.

Being in that environment again was beneficial for helping me see the sincerity and good intentions of the members and the special feelings they hold within their community. I more clearly realized they aren’t intending for outsiders to feel rejected, abandoned, and traumatized, even though those are the unfortunate effects that sometimes result due to lack of understanding. I felt inspired to take things less personally and to show more compassion, kindness, and patience in return. It felt therapeutic to share insights with the class that I had a difficult time seeing when I was a fully believing Mormon. 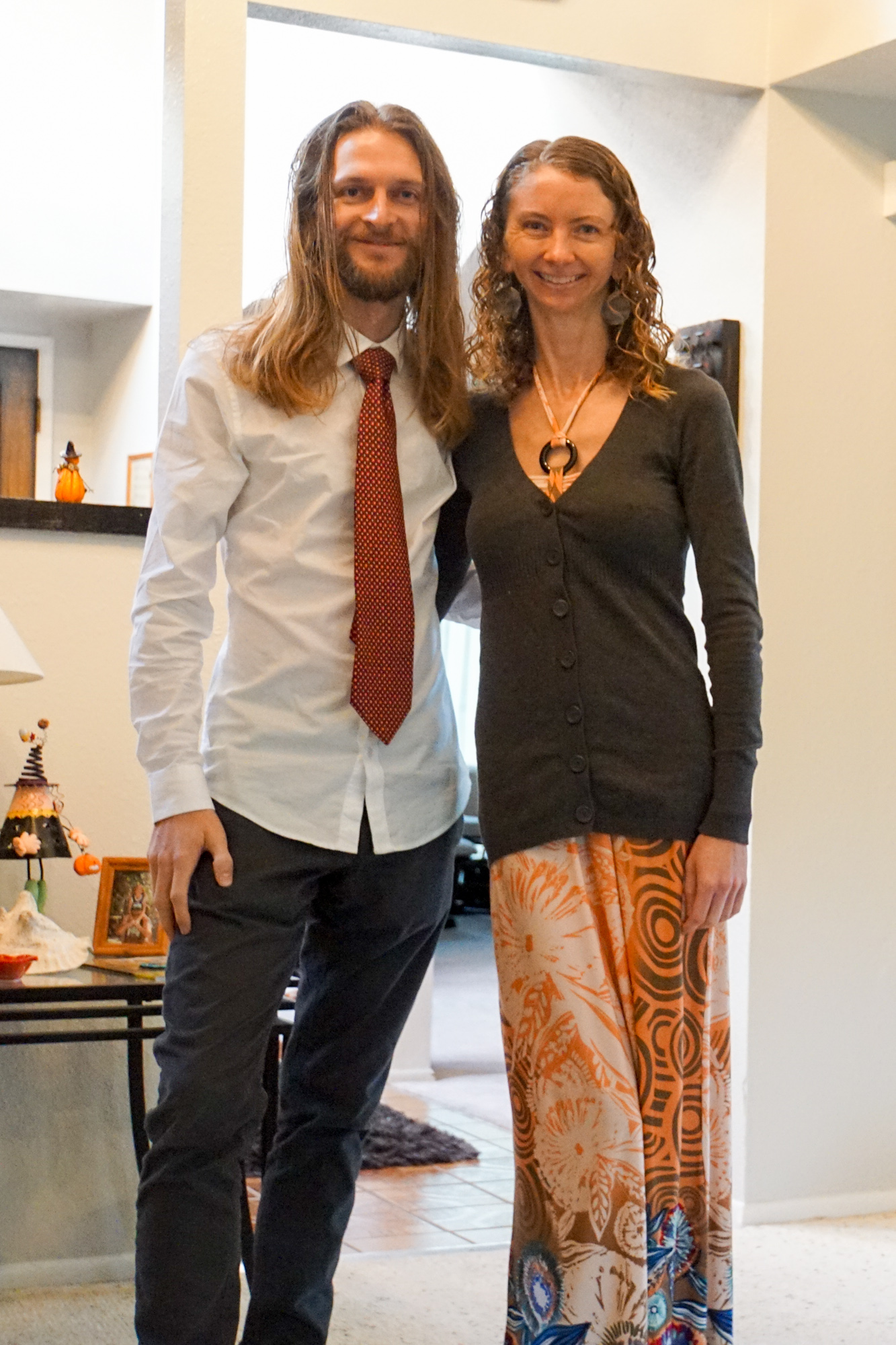 On that theme, Brandon and I also attended one day of the Exmormon Foundation 2015 Conference, where we mingled with many nice people and listened to some interesting and helpful presentations. My favorite session was about managing family relationships across faith boundaries, with Peter Danzig, who is a therapist specializing in working with individuals and families around faith transitions. Brandon and I also met John Dehlin at the conference and really appreciated getting the chance to connect with him. He’s doing a lot of great work helping build community for Mormons in transition. We also found ourselves walking to Zest with a friendly couple during the lunch break, and had a nice chat with them while we enjoyed our meals together.

We spent Halloween with Ashley’s family at a party they hosted, which was masterfully decorated. They have such a great house for that sort of thing, with all the black on the railings, electric candle chandeliers, shutters, balconies, and a tall black lava rock wall. Expertly crafted spider webs were hanging spookily throughout, and they also have many curved archways and some sconces, in which they’d placed a couple large lit up candles. It all created a suitably shadowy and pleasantly eerie atmosphere! The party was a lot of fun, with really delicious food and drinks, festive costumes, lots of friends, and great conversations. 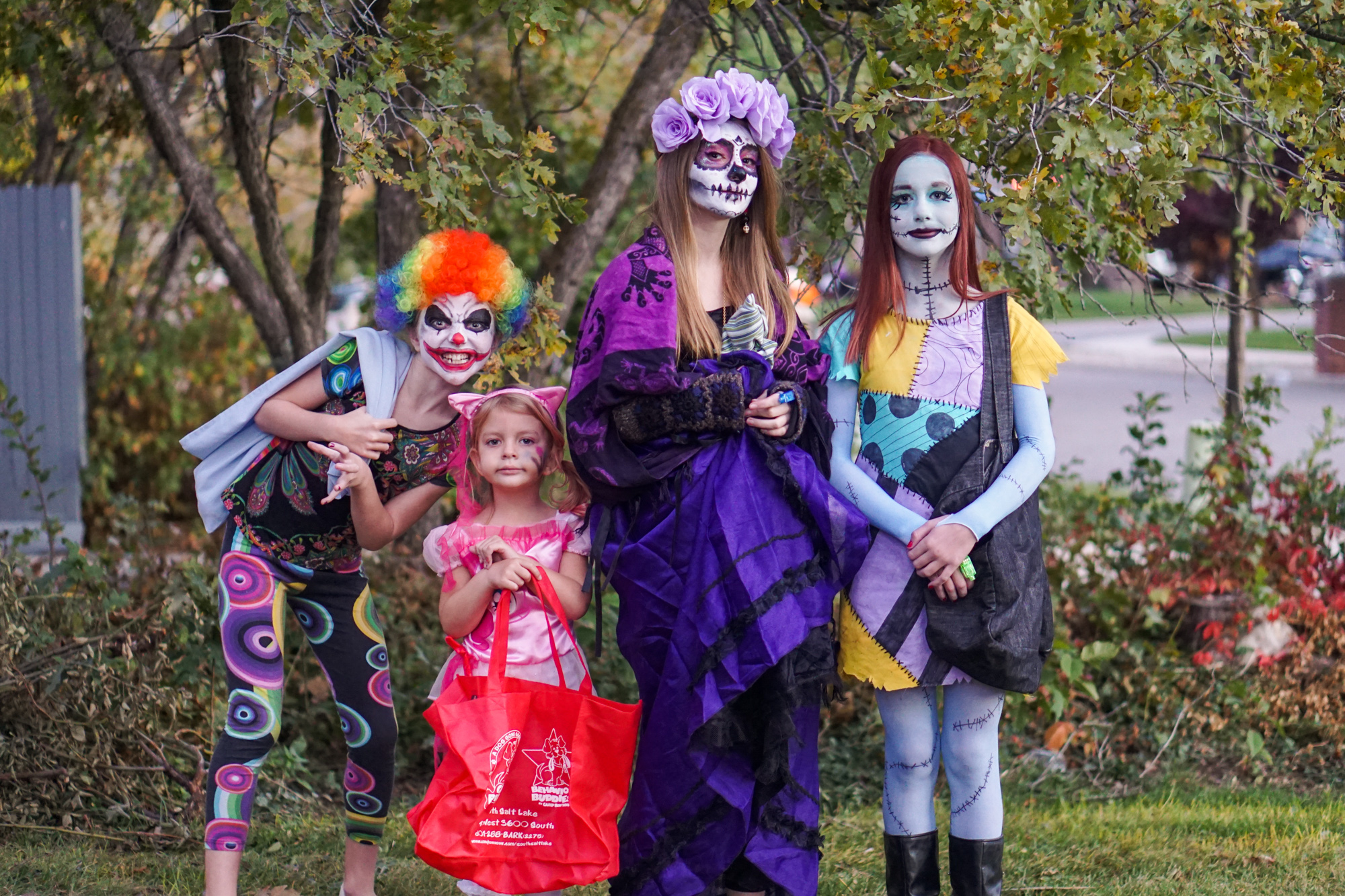 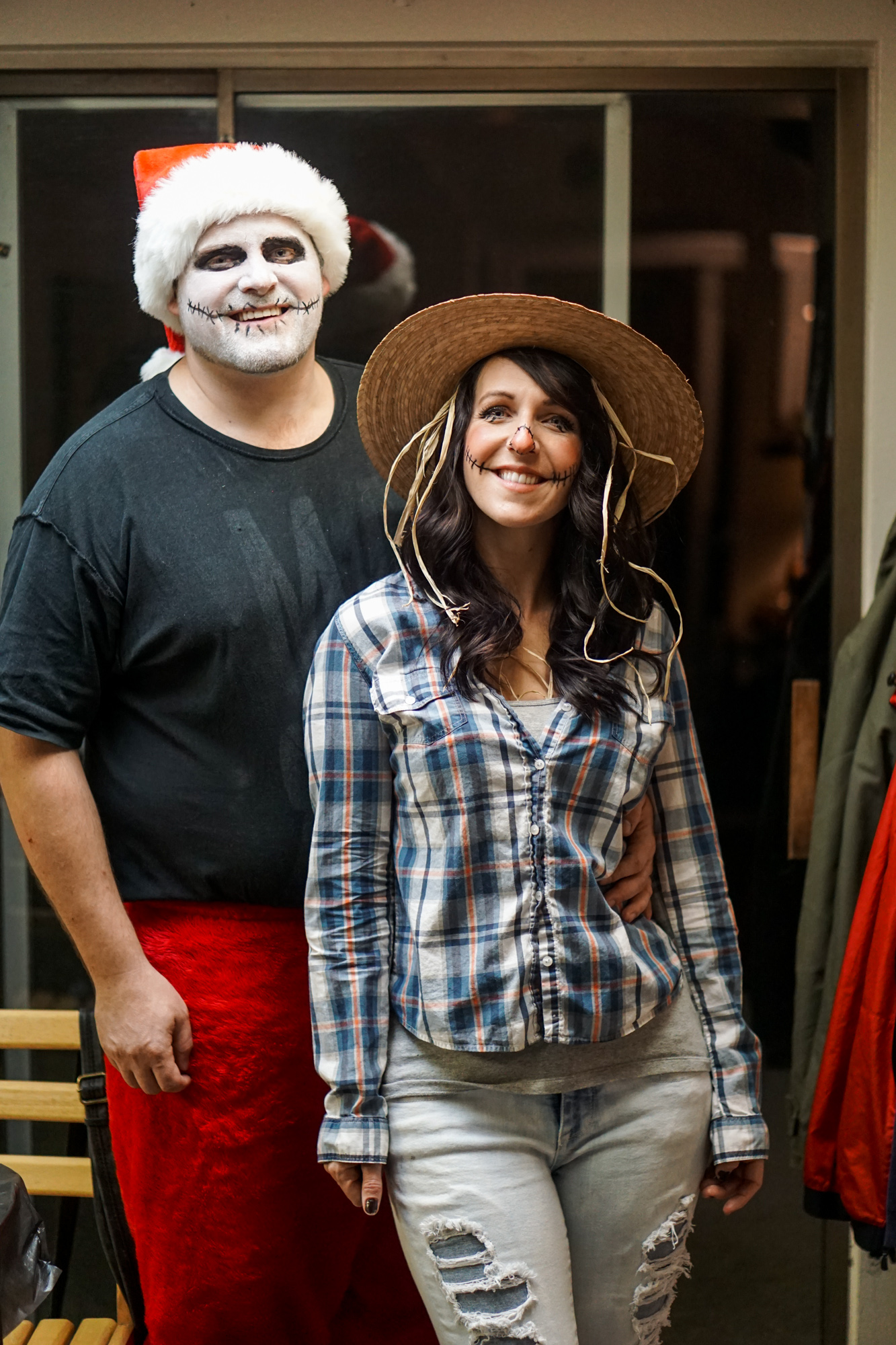 Casey, as Jack Skellington, with his loving scarecrow, Ashley 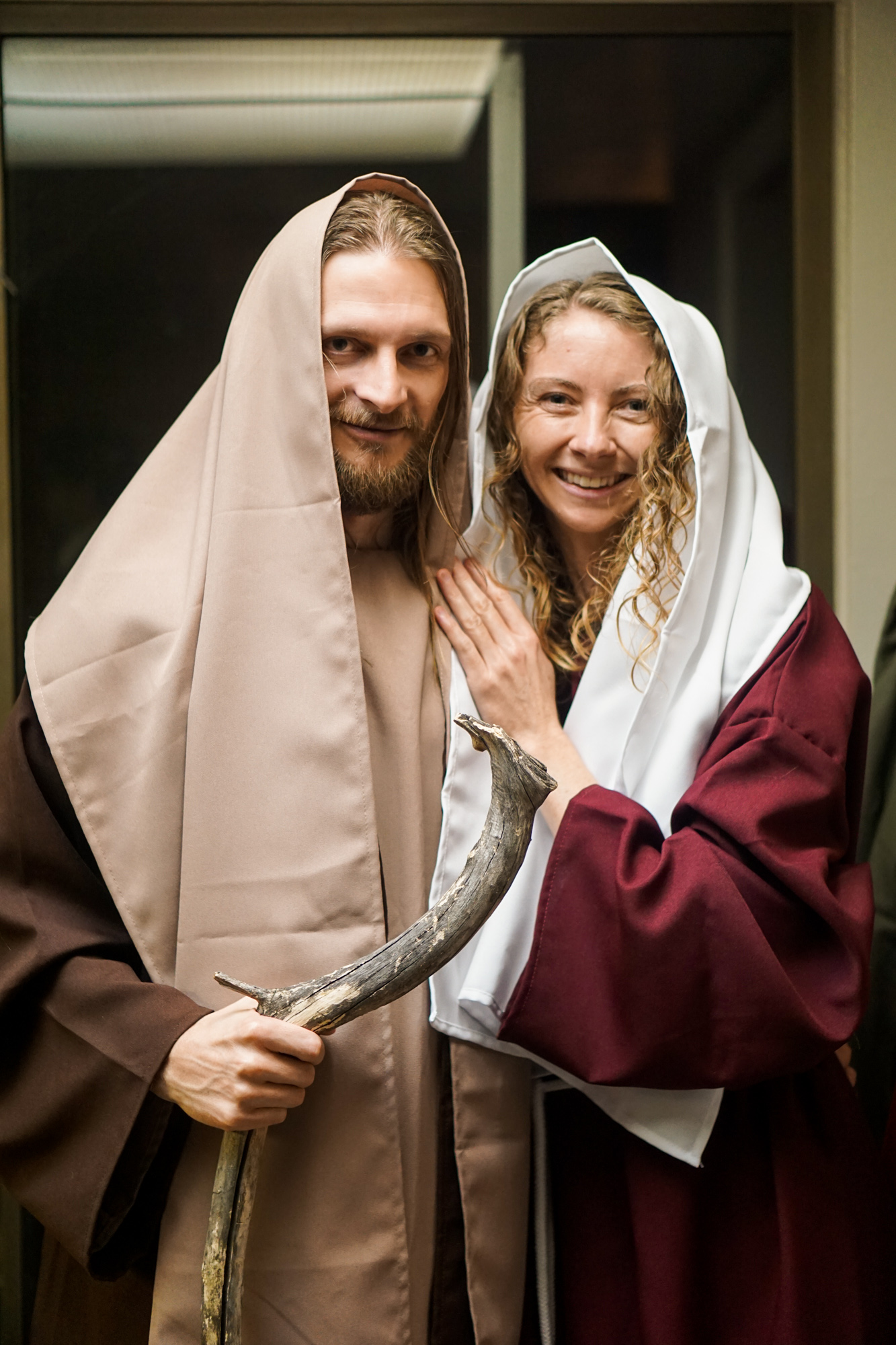 Brandon, as Jesus, with his sweet Mary Magdalene, otherwise known as Jennifer

We went to bed late and got up early to make it to the airport in time for our flight to San Miguel de Allende, Mexico. Continuing the festivities with a worldschooling twist, we were off to celebrate Day of the Dead!

We’re so glad to have experienced the nostalgia of coming home during this recent visit in Utah. We’d love to hear your thoughts about what kinds of things help you feel at home. Please share in the comments.