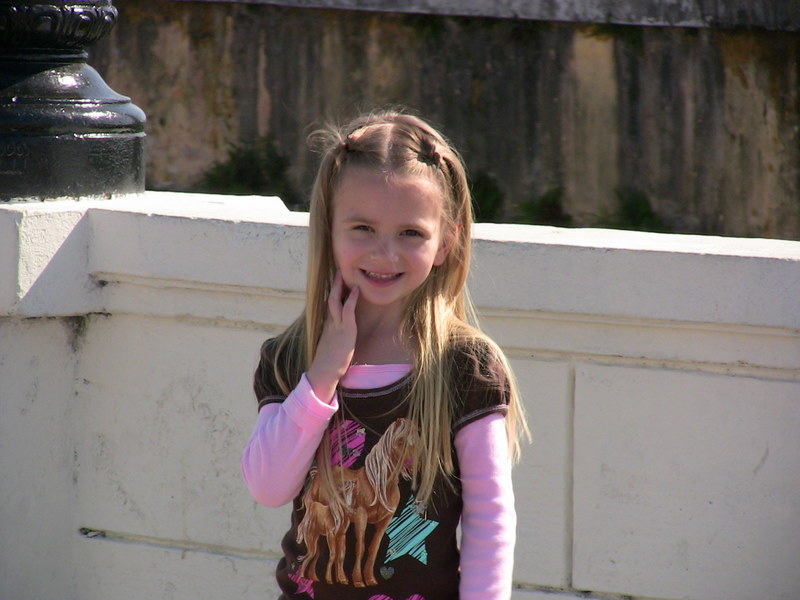 The Panama Canal and more

Today, we had another wonderful daily breakfast at the Balboa Inn. (I especially love the fresh fruit.) Then we had a taxi pick us up and stay with us most of the day. He offerred to do so the night before when he dropped us off, so we had our own driver today for about $50.  One thing I forgot to mention yesterday about Panama driving, is that the traffic laws are all considered “suggestions”. People on your right cross in front of you to turn left. Stop signs and red lights are often ignored. It really is crazy, and I’m glad I’m not driving here.

Our taxi driver had recently gotten in an accident and totalled his new car. That’s sad news, but also left me with a somewhat discomforting feeling…, about which Jen remarked that it probably means he’ll be even more cautious now.  I hoped so, because the backseats where the girls and I were, didn’t have working seat belts. :) Fortunately, he was an excellent driver, and our travels were uneventful except for the places we saw.

We first went to Casco Viejo (old town), and walked around a little bit to look at some monuments, and off at the distant city and places like the causeway where we’ve already been a couple times. The sun was shining brighly and Emily was getting irritated about the sun being in her eyes. I offerred her my sunglasses, but they broke as I took them out of my bag. :) So both she and Marie became quite grumpy and uncooperative at this point. We didn’t spend too long here, but did walk around to look at the beautiful views.  There were some Kuna Indians sellings crafts along the walk, as well.

Then he took us to Panama Viejo (old Panama), where we saw some ruins of old Spanish forts and other buildings, and drank milk right out of a coconut with a straw (for $1). It was quite refreshing. Unfortunately, the ruins were closed today so we couldn’t get too close, but they were still neat to see.

After that, we went to see the first set of locks on the southern side of the Panama Canal – the Miraflores locks. Millions of gallons are pushed through these locks to raise ships up and down so they can travel through the canal.  Ships pay hundreds of thousands of dollars to go through the canal, a process which can take up to eight hours. We watched a tanker go through, and it was very interesting (although a somewhat long process for the girls). They were pretty whiney today.

We then stopped at a grocery store for some toothpaste and laundry supplies, then had lunch at a quick restaurant where we had a burrito and the girls had quesadillas – delicious. Then we went back to our hotel.

We didn’t know what we would do at that point. Maybe rest and then go out to dinner a bit later. But one of the workers at our hotel knocked on our door (her name is Gloria), and handed us an inflatable child’s swimming pool for the girls! They had been wanting to go swimming, so we blew it up and filled it up (with buckets) and the girls had a great time splashing around in the back yard. I took some pictures around the hotel as well, which you can see below.

I have to say that the staff at the Balboa Inn has been extremely helpful. They’ve made phone calls for me to arrange car rentals and hotel payments (at other hotels), call taxis, order dinner (which I’ll talk about in a minute), and help in many other ways. They love our girls (most people stare at their golden hair). Most of the staff doesn’t speak any English, but they are very sweet and friendly. It also gives me good Spanish practice. :) Those who do speak English, speak it perfectly.

After playing in the pool, we watched several cartoons in Spanish (Diego, Wonder Pets, Little Bill – all the Nick Jr. standards). And Jen and I read some of the travel books and magazines about Panama they had there. We learned a lot not just about Panama city, but also got great ideas for the other places we’ll be going to shortly.

It was getting late, and we started to get hungry, so I asked if there were any places that could deliver food to us (with a little help from Google Translator :)). Fortunately, there were, and Gloria ordered us some sushi – three large rolls, all sliced up, for about $15. Jen and I loved them, but the girls… not at all. We forced Emily to eat one, after spitting out her first. Marie tasted and spit out one as well, but was still hungry, so Gloria gave her some strawberry yogurt and milk. Isn’t that nice? She’s getting a good tip before we leave. :)

There were a couple times when the girls were watching TV and Jen and I were reading, that I was tempted to get out my laptop and do some work, like I would have at home during down time. But as I sat there, I realized that I really didn’t want to work. I was actually enjoying what I was doing, without a computer in my lap! Is that really possible? lol.

We have been having a lot of fun together as a family on this trip, despite the whining that sometimes ensues with the kids. It’s so much easier to go out and do fun things together when there are so many new things to experience, rather than the same old places at home.

By the way, thanks for all your great comments. It’s nice to know that people enjoy reading about our travels. It’s also been a great way for me to journal and remember what we’ve been doing. I may not always be able to write daily (especially during the weeks we won’t have Internet access), but will do my best. I just hope I can keep the posts interesting enough for everyone…