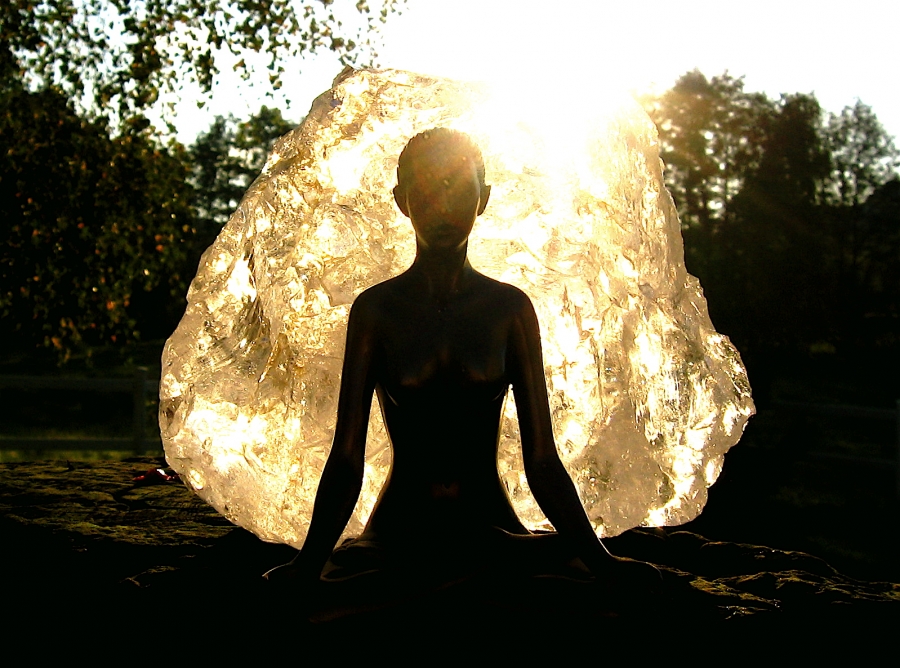 The Reality of Spirituality

The town of Ubud in Bali, Indonesia is a hub for yogis, spiritual healers, health conscious individuals, and followers of New Age philosophies. Everywhere you look are ads for meditation courses, yoga classes, or detox retreats. Out of curiosity, and for the chance to get out on my own for a while, make some friends, and learn something new, I attended a 5-day Craniosacral workshop retreat. While there, I received a crash course in skeletal anatomy, met some beautiful people, and gained a whole lot more than I bargained for.

I grew up a very spiritual person within the context of Mormonism. I believed in God with all my heart, prayed diligently and regularly, and was able to recognize His influence on a daily basis. But as I left the LDS church, I became skeptical of anything that couldn’t be proven through the scientific method. I discovered that much of what I had believed growing up was a distortion of the truth, and I came to understand how easy it is to believe things that are not true, even in the face of strong opposing evidence. I still felt peaceful feelings after I left, but I no longer associated them with a male God in the sky or an invisible Holy Spirit. It seemed more likely to me that they were simply a combination of chemicals in the brain, as people in many faith traditions experience these same feelings but interpret them differently. 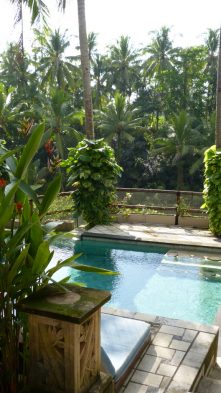 This retreat, however, was a very unique experience for me. At first, I was really weirded out. We started off with a meditation, but it wasn’t simply quieting your thoughts or “observing the observer.” Instead, the instructor called upon the family of light, the fairies, the devas, the ascended masters, etc. and instructed us to harmonize our chakras with the crystal heart of gaia and the heart of the galactic mother. Woah! It was way “out there.” I didn’t quite know what to think and was wondering if maybe this wasn’t the right workshop for me. I was relieved when another class member spoke up immediately after the meditation expressing the exact same concerns. This gave the teacher a chance to explain more, and after some group discussion (and sharing where I was coming from), I understood that these phrases were simply symbols to help us connect more with our higher selves, and weren’t indicative of things like fairies existing in the material world. Whew!

The people there seemed cool and I had paid my money so I decided to roll with it and see what I could get out of the course. And outside of the meditations, it turned out that the rest of the workshop was much more down the earth (well, in some ways).

The instructor, Michael, is an osteopath and has been doing this type of work for over 15 years. We spent the first day learning about the history of osteopathy and craniosacral therapy, as well as some general anatomy, from the location of the sphenoid and hyoid bones to the purpose of fascia and cerebrospinal fluid. My head is still spinning with terms like exterior occipital protuberance and tantorium cerebelli.

The first few days of the retreat were nice and we did practice a little on each other. I was of course skeptical of everything that happened. I did feel deeply relaxed, extremely peaceful, tingles like lightning all throughout my body, and a few other sensations like my hands disappearing or criss crossing when they really weren’t and other experiences that are difficult to put into words. Still, I had no reason to believe these sensations were coming from anything other than my own brain. They were similar to the feelings I’d felt doing Tai Chi, praying as a youth, and the relaxed state I’m in right before I doze off to sleep.

On the fourth day, however, I had two unique experiences that have left me feeling like there may be more to all of this. First, the teacher did some work on me as part of a class demonstration. As he put his hands under my head and his thumbs on my TMJ, he sensed things moving to the left as if there were trauma there. I pointed out an accident I had as a child on left side that resulted in a dimple. He tuned into it and over the next 10-15 minutes I felt some very strange movements. I felt my jaw moving to the left, then settling a little. Then I felt the entire left side of my face being pulled to the left (like a foot or two away from my face), and the back of my head being pulled back and up with some gentle tension. It was not happening physically. Michael wasn’t moving his hands that I could tell, and I knew I was staying still. It was more of a spiritual movement, like in the old Scooby-do cartoons when they unmask the villain and his face stretches, but it was gentler than that and like the mask was inside and ghost-like. I’ve never felt anything like it. Michael described a few things he was feeling to the class as he worked on me (like where things were moving and when they released) and I was feeling those same things at the same time he described them. Most importantly, those pulling tensions slowly began to resolve until my jaw felt like it had been set back to its normal position like it was before the accident. It felt perfectly in place and symmetrical for the first time in decades. At that very moment when I felt it resolve, Michael said “ok” and moved on to finish the treatment because he also recognized that it had resolved. Very interesting.

I felt dazed and relaxed after getting up, and was speaking slowly and calmly. I wasn’t sure exactly what this meant or what I had experienced. Looking in the mirror, I don’t notice any difference in my face. But for a good hour or two afterward, it felt different (and still does to a smaller degree) — like my face was normal again, but a bit numb like I had just undergone some kind of surgery. My smile felt bigger and more natural, too.

Then later in the afternoon, another student worked on me, and while she was doing so, I felt a hand gently pressing down on my stomach. Sometimes Michael touches a leg or back as we’re working so I thought it was him, but it was staying for several minutes, so I opened my eyes and saw no one there. But there was still a pressure on my stomach rolling along with each breath right above my belly button. Unlike earlier, this didn’t feel spiritual, but like an actual physical pressure. And it lasted for the rest of the session. I wondered if it might just be indigestion, but it felt different somehow and more constant. And again afterward I was in a very dazed state, so grateful and peaceful, I felt like I could cry, and actually did just a little. The space felt very holy.

So, what’s going on here? Is my mind just playing tricks on me? I can’t claim that any of this stuff is real on the physical level, and it certainly wouldn’t be detectable by any observer or machine, and appears to be a completely subjective experience. Still, it had an impact on me that was different and even more powerful than what I’ve experienced in my own meditations and practices, especially when considering the congruency between what Michael and I felt during the session. Perhaps it’s all just in the mind. But then again, perhaps our entire existence is happening in the mind. Quantum physics gets pretty spooky when you consider that electrons don’t have a state until they’re observed, that there is more empty space in matter than anything else, and when you note the studies that show (although to a very small degree) that the mind can influence random number generators and that the brain reacts to images before they’re seen by the eyes.*

As I tried to determine whether the experience was “real” or not, I remembered what Dumbledore told Harry Potter during his after death experience in the last book: “Of course it is happening inside your head, Harry, but why on earth should that mean it is not real?”

One thing I found that helped me to experience these things more fully was to turn off my left-brain. At the teacher’s suggestion, and against my normal tendency, I decided to ignore the thoughts popping into my head questioning and analyzing everything. I stopped trying to figure out what was happening or if it was “real” and instead just focused on the sensations I was experiencing. Interestingly, over the course of the week, I found myself becoming more sensitive to these subtleties and better able to tap into them.

I’m actually finding myself in a very different state now from when the week began. It’s weird and wonderful. I feel more sensitive in every way. More aware of what’s going on around me. Better able to focus in on whatever I’m doing. Better able to connect with the people around me. Better able to sense the differences in their energies and moods. The people in the class were amazing. Some were so gentle and serene and calming. Others have a strong love, or are firmly grounded. All were full of love and acceptance. It’s interesting that I can be aware of these differences. I also feel more gentle. More peaceful. I seem to smile and laugh more easily, and I have more patience and acceptance. The world seems to move by more slowly. It feels really good and I hope it lasts! 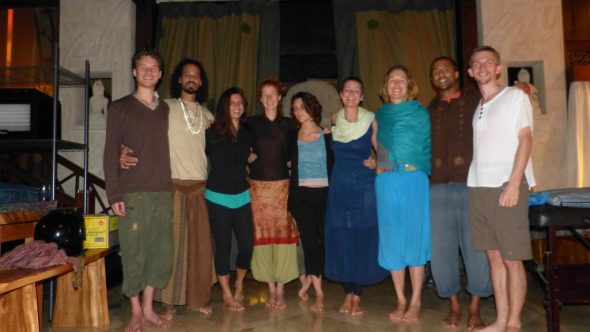 Classmates at the cranio-sacral workshop

Maybe I’m just fooling myself and when all this stops and I’m back to feeling “normal” again in my reality, I’ll be able to see how silly it all sounds. Then again, the reality I’m in now feels more real and intense than ever before, and I don’t want it to stop. What is reality anyway, beyond our subjective perceptions?

So that’s my experience. What are your thoughts on spirituality? Do you believe there’s more going on than can be observed by the five senses and measured by machines? To what degree? Do you think there are spirit guides and auras and reincarnation, as some people claim to “know” or is all that just airy-fairy fluff? Or maybe you’re not really sure and you’re able to carry on in life without worrying about it too much.

Whatever your perspective, I’d love to hear your thoughts and experiences. Please share your comments below.

* For info on these and other studies, see the books Science and the Near Death Experience, Blink: The Power of Thinking Without Thinking, War of the Worldviews, How God Changes Your Brain.

12 Tips For Extended Travel With Children