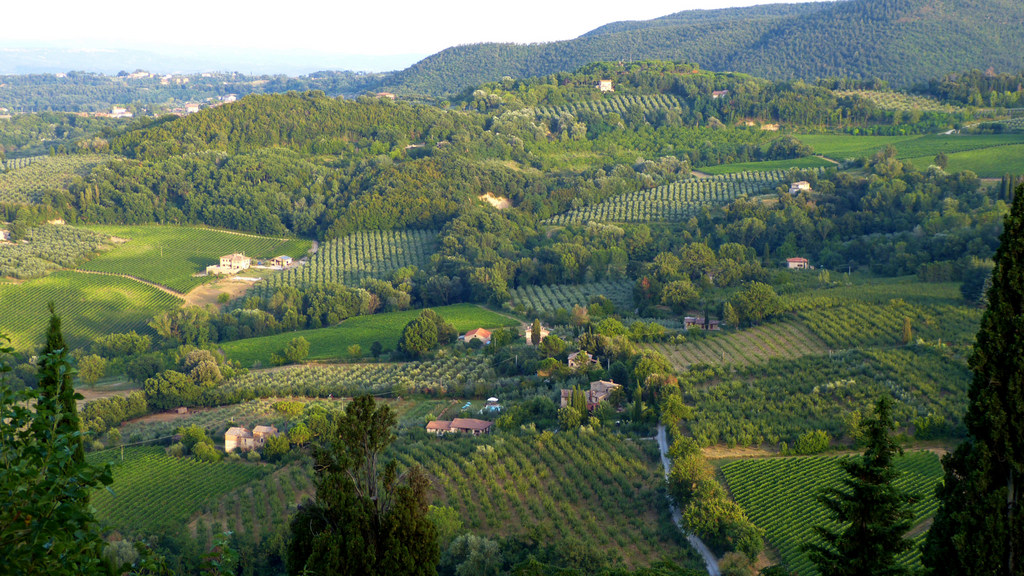 Of all the places I was most excited to visit in Italy, the countryside in Tuscany was highest on my list. I imagined serene landscapes of rolling hills and vineyards, dotted by quaint little mountain towns. I’ll just say I wasn’t disappointed. Here are some of the scenes we came across.

The towns themselves were filled with old world charm, some of them appeared to have changed little in the past 400 years. High stone walls, falling apart but still standing strong, cobblestone streets, large wooden doors, arches…

We stayed mostly in the town of Montepulciano, and took trips to several nearby towns and cities, including Piensa, Bagno Vignoni, Monteciello, Perugia, and Montefioralle.

And believe it or not, in the middle of the Italian summer, we discovered snow in the mountains of Tuscany. Here is Marie freezing herself on the snow.

And Emily standing in front of an ice cave she found.

Okay, actually, this isn’t snow. These are calcium deposits left by a natural hot spring called Bagni San Filippo. In other places, the rocks were a rainbow of yellow, red, blue, and other colors. And the water temperature was nice and warm to very hot.

Here I am enjoying a nice hot waterfall shower massage. Pay special attention to my muscles.

This region is also famous for wine. I’m an extreme wine novice, having never had any drinks until I was 30, and never liked much of what I tried after that. But here I’ve found a few wines I’ve enjoyed, mostly white and dessert wines. It did take me a good 10 minutes to figure out how to open a wine bottle, though.

Sometimes they even serve free wine from fountains.

I’m kidding. That’s just water. Cool fountain though, isn’t it? That was in Perugia (Umbria province).

In Montefiorale, we saw a flier that said “Opera” and had a picture of a piano and some people, so thought we’d attend an opera performance. We went into the beautiful theater, and there was a piano, but instead of singing, we realized after using our translator app, that we were attending a lecture by a psychologist of sexology discussing emotions. The music concert was another day. We were fascinated by the topic, but it was all in Italian and we weren’t understanding much, so decided to leave early. But we did stumble upon the ending of a local flag throwing competition!

Other nights, we did hear a choir practicing, and we did attend a performance to hear some lovely Italian arias. Jen and I actually hired a babysitter and went on a date! Here we are before our date. Isn’t Jen pretty?

We also had a fun picnic earlier that day.

Check out more pictures and videos of Tuscany below.

First Timers in France, Part One