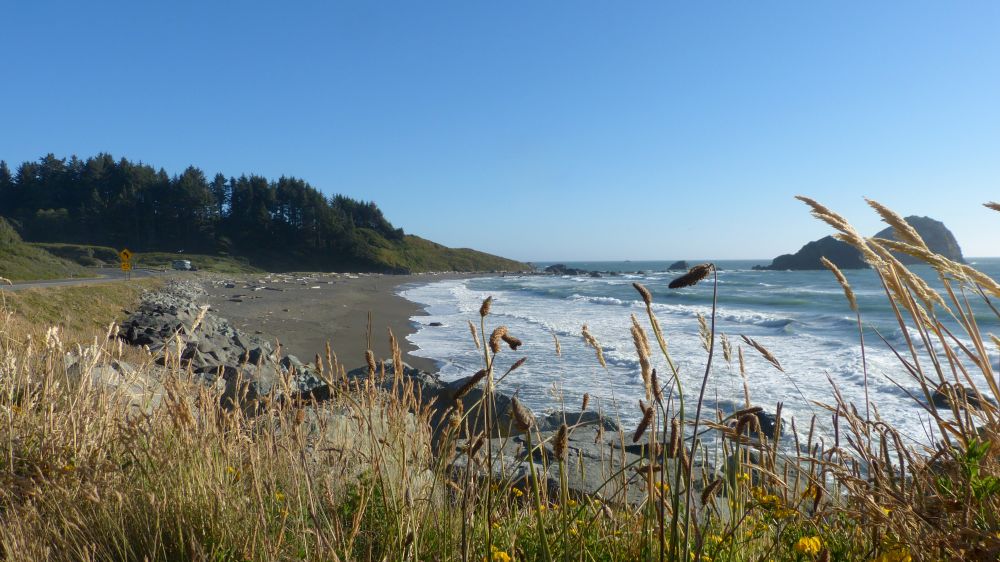 The good ol’ family road trip. It’s something we haven’t done for a long time in this part of the world. And this trip, our focus was on meeting up with friends and family and being reminded of what it’s like to live in a developed western country. On our way from Bali to the states, we had a long layover in the Seoul, Korea airport. I usually like to keep layovers as short as possible, but this airport had some nice amenities, including a cultural center with musical performances and free arts and crafts for kids. It also has an ice skating rink, golf course, spa, several gardens, and other amenities just off site that we didn’t have time to check out.

Our first destination was Salt Lake City, Utah, where we spent most of our time running errands, hanging out with my sister, and visiting with other family members. We also went to the Lagoon amusement park for my niece’s birthday, watched a movie in the theater (Maleficent), enjoyed a potluck barbecue for summer camp, and set up some new computers/electronics we had ordered. It was a very busy week, but we had a great time, especially visiting with family.

Then we flew to San Francisco and drove up to Guerneville to visit my uncle Paul and his husband Craig. We stayed with them for several days and they were such gracious hosts. We enjoyed the great conversation, delicious meals, and peaceful atmosphere of their home surrounded by giant redwoods. They own a candy shop called Powell’s in Windsor that has every kind of candy you can think of, and they loaded us up with lots of goodies that we’re still finishing off. We also explored Armstrong State Park and saw the 1200+ year old trees that are among the only old growth forests left in the area that weren’t cleared for logging over the past 200 years. Breathtaking!

We also visited some friends in Occidental who we’d first met in Bali. David and Sarah are the sweetest couple, and we had a great time hanging out as they showed us around their area. We had a great brunch and “linner” together on Father’s Day, and I got to play on David’s sitar and ukelele, while the kids pounded on the drums and other instruments, and David played some music for us on his acoustic bass and other instruments. (By the way, I LOVE the sound of the sitar. So resonant and rich and fun to play as well.) We enjoyed some snacks together at the beach along the Russian river where we skipped rocks and waded in the water. And we were “blown away” by the winds at the coast which were so strong and cold that we left almost as soon as we could take a picture. It’s very scenic and beautiful around Goat Rock, though.

Driving up the coast, we continued on to Crescent City, California, where some friends from Grants Pass, Oregon came down to meet us the next day for some play time exploring a beautiful beach and the amazing redwood forests nearby, before taking us back to their home, where we spent the next several days. The Lybberts are a lot of fun, and our kids and theirs were practically inseparable for the entire time we were there.

Grants Pass is a great little town with beautiful scenery, nice weather, and houses that sit on large lots, although Jared was quick to remind me how maintaining a large yard can easily become a full-time effort and a big expense. It sounds like it has a great homeschooling community, with plenty of kids classes (art, gymnastics, and more), and all the necessities of a small town. We visited a park along a scenic river, strolled through the market, attended a play, and watched How to Train Your Dragon 2 at the movie theater. We also enjoyed hanging out at the house and staying up late chatting, roasting smores, and watching movies. When we left for this trip, we hadn’t seriously considered the thought that our second home base might end up in the USA, but after Grants Pass, we decided not to rule it out completely. We felt like that particular town might be a little small for everything we’re looking for, as we want something that’s a little bit bigger contrast to Bali, but there’s a lot to like about Grants Pass.

The next big stop after a quick lunch in Eugene (a town where we really did like the vibe and wished we’d planned more time to explore it) was Portland, Oregon. One of our friends we met in Bali has settled here as well, and we met with her and her daughter for lunch one day, and hung out / shopped with her a bit the next day as well. Unfortunately, our time in Portland was also short, and we liked what we saw there, too. Trees covered the place, most of the neighborhoods had a lot of character, and many parts of town were walkable. The people seemed friendly and “crunchy” (a new word I recently learned that I’m still trying to get the hang of, but I think it means something like earth-conscious or those who care about the environment, which we like).

Continuing on, we drove up past Seattle to Mill Creek, Washington, where my mom lives. We stayed at my uncle Jeston and aunt Eve’s house while the kids (minus Aysia) slept at their Grandma’s. We had a nice dinner all together, and stayed up late visiting a few nights. Here, I also bought a new camera because my old one had a chip inside the lens that was causing some aberrations in the photos, and it would be more costly to repair than replace. I decided on a Sony NEX a6000 — my first DSLR — and I LOVE it! Photography has become exciting again, and all my pictures are turning out so much better.

It also makes a good excuse to avoid getting my hands dirty. Plant flowers? No thanks, I’ll just take pictures of you guys doing it. :)

We did a bit of shopping for some wedding clothes for my sister’s wedding in July. We also visited the incredible Central Market store which seems to have any healthy food ever made, and many products can be purchased by weight, so you can buy as much or as little as you want. Want organic red grain quinoa? Check. A whole aisle of curries and spices? Check. 30 bajillion different types of granola (including hemp)? Check. I have never seen selection like this anywhere — especially in a place where I can actually read the labels.

We visited several parks as well, and Aysia can’t get enough of swinging. A couple years ago, Emily went through a phase where she was “too old” for playgrounds. But she seems to have outgrown this, fortunately, as this part of the world has a lot of fun playgrounds. We visited a couple playgrounds up in Bellingham as well, where my aunt and uncle live, and whom we stayed with for a few days.

It was great to catch up with my aunt Kristin and uncle Craig again. Fairhaven (near Bellingham) is a really cute town, and we did a glass and ceramics craft project there with scones and tea, and had some of the most delicious sipping chocolate and gelato at Chocolate Necessities in Bellingham.

We also hiked to a nearby waterfall (and playground) in the area. The weather was a bit cold for us in Bellingham, but a light jacket kept me warm enough. It sounds like it got warmer after we left.

We’ve enjoyed this first leg of our trip immensely, in large part due to the people we’ve been able to spend time with. We want to thank everyone who gave us a place to sleep and/or took time out of their days to meet with us or share a meal. Thank you!!!

We crossed over into Canada on July 1st and will be posting about our adventures there soon.

Here’s a video I put together for the trip, and some of my favorite pictures.