Continuing our journey through Spain, we arrived in Valencia, where we were met with red wine, cured ham, and cheese, courtesy of Lorenzo, the owner of the apartment we were renting. Shortly after that, the girls from the Clark family showed up to share the apartment with us, and we all went out to dinner that night for tapas with our friends, Darcy and Katie, who were also visiting the area. What a fabulous way to begin our time in a new city!

Aysia’s fourth birthday arrived the next day, so we celebrated with the Clarks by renting a four-wheeled, six-seater “family” bike to drive around the Turia park together. The kids enjoyed playing at Gulliver’s Playground (which is a giant Gulliver for kids to climb and slide around on), and we stopped for some ice cream along the way. Later that night we shared a delicious chocolate birthday cake, which Aysia decorated with rainbow marshmallows. The Clarks even brought a couple of beautiful dress-ups to give Aysia on her special day. You may catch sight of the mermaid dress-up in many of our photos. In fact, she wore it for several days and nights in a row, before I could persuade her to let me wash it. Aysia also enjoyed a birthday chat with her Grandma Alli that night through the Internet, for which she was squealing in excitement. 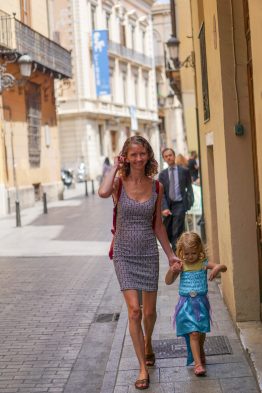 Lorenzo kindly offered to take all of us on a free bike tour of Valencia during our stay, so we spent the next day on bikes riding around the city together. First stop was a breakfast shop with bocadillos and waffles with chocolate and ice cream. After that we rode the bikes to Gulliver’s Playground again and then had some lunch at a restaurant by a lake, where Lorenzo went on a swan boat ride with the kids. We had a bit of a fiasco with the bike rental shop when one of the bike tires went flat during our ride and they wouldn’t come out to help. In the end, Lorenzo saved the day by walking the bike back to the shop for us.

After Valencia we travelled with the Clarks to the Barcelona area, sharing a beautiful pink rental house with an amazing view, in a small town called Corbera de Llobregat. While there, Emily recorded her Heart of Diamond song and shared it online. After six wonderfully memorable days spent together, we said goodbye to our friends, as they left for Paris to continue their vacation.

Skyping with Martin and Ben, the rest of the Clark clan. :)

Our family stayed in the Barcelona area for several more days and spent a lot of time with Jennifer Wells and her family who recommended a visit to La Floresta, where we stopped in at an artisan workshop open house. We saw sculptures made out of all sorts of materials, such as wire, metal, clay, wood, and stone. We enjoyed seeing all the artwork and talking to some of the artists and sculptors. The girls even had their portraits painted, which was a really unique opportunity and interesting for all of us to watch.

Afterwards, our friends took us on a peaceful nature walk to a river spot, with a swimming hole and small waterfall, where we shared a few snacks together. Then we hung out at their house for a bit and ate some freshly homemade sourdough bread, before doing some grocery shopping and calling it a night. Back at home, Brandon promptly fell asleep on the couch for a few hours and somehow ended up holding onto Marie’s giant teddy bear in the process. Sadly, I didn’t think to take a photo of the precious moment. Pictures are worth a thousand words, after all. Speaking of which, this next one is beautiful, taken from our friend’s house that night.

Jennifer Wells and her family also took us up to Montserrat on the cable car one day, where we marveled at the awe-inspiring views, shared a picnic together, and saw the ornate Benedictine abbey. Some other new friends also joined us and we took the funicular higher up the mountain and hiked down, before riding the cable car back to the parking lot.

Our friends also invited us to a couple of meet-ups with other homeschoolers in the area, such as Arte Libre, in Ciutadella Park. We all had fun making arrangements with leaves and other natural items placed onto white paper. Then we sprayed over them with paint, making some beautiful designs. We had some lunch at the park, and the kids played together at one of the playgrounds for a while. Another homeschool activity we were able to attend was a fun circus workshop where they did everything from juggling to hoola hooping, to yoga, and afterward everyone enjoyed a picnic together in a big open wooded area. We feel fortunate to be able to connect to other homeschoolers in our travels, especially in Europe where they are fewer in number.

A long-awaited event for Emily happened while we were visiting the nearby town of Sant Cugat and stumbled upon a salon that uses fantasy color hair dyes. We went in to ask about the possibility of coloring the ends of Emily’s hair purple, in ombre style, and they were able to fit her in, right on the spot! 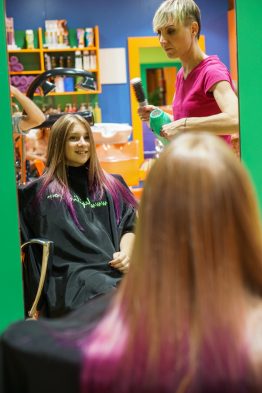 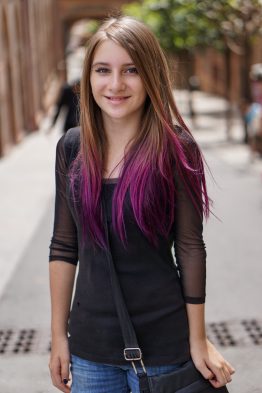 We also spent a few days at home resting, during which time, Brandon and I did a Skype call interview with a podcast for traveling families, and the girls also spent many hours chatting on Skype with family and friends. They really appreciate having their own account for that now!

We decided to extend our stay in the Barcelona area just a bit, when we found out about the Corpus Christi festival happening in Sitges, a really cute town on the coast, southwest of Barcelona. We just couldn’t resist going to see the Parade of the Giants, and also the flower carpets, made early in the morning by the town residents using flower petals and seeds, which cover most of the narrow streets and some of the plazas. The experience was well worth it!

On our way further north, we drove to Zaragoza, the capital of the Aragon region of Spain, where we saw the amazing Basilica of Our Lady of the Pillar, as well as the Puente de Piedra spanning the Ebro River. After spending a couple of nights, we continued our journey through the beautiful Pyrenees mountains to San Sebastian, also called Donostia, in the Basque region of Spain. We enjoyed listening to the audio book, A Short History of Nearly Everything, by Bill Bryson, in the car together during some of our longer drives, and we’ve also been listening to the Pimsler French language learning audios together, getting ready for our first visit to France.

In San Sebastian, we mostly just ate Pintxos (tx makes the ch sound in the Basque language) which are the Basque equivalent to tapas, usually priced between 1-4 Euros each. The place we stayed gave us a list of some of the best pintxos restaurants and what to order at each one. We were in food heaven, where we had such things as sardines with salmon, mushrooms (a $20 plate of them, yikes!), crab crepes, foie gras, duck, lamb, pork ribs, and ravioli, all within a couple square blocks of each other. While in San Sebastian, we also took a walk up Mt. Urgull to see the view of town overlooking Playa Concha. Absolutely gorgeous!

When it was time to leave Spain, we took a train ride to Bordeaux, France, during which the girls entertained themselves by asking me questions while I was sleeping, as my head was bobbing in all directions. A backward/forward movement meant yes, of course, while a side to side movement meant no. They thought my unconscious answers were pretty hilarious. What can I say, my girls are experts in entertaining themselves, although I guess I do get to take partial credit in this case. :) Be sure to check out Brandon’s video, and stay tuned for our upcoming adventures in France!