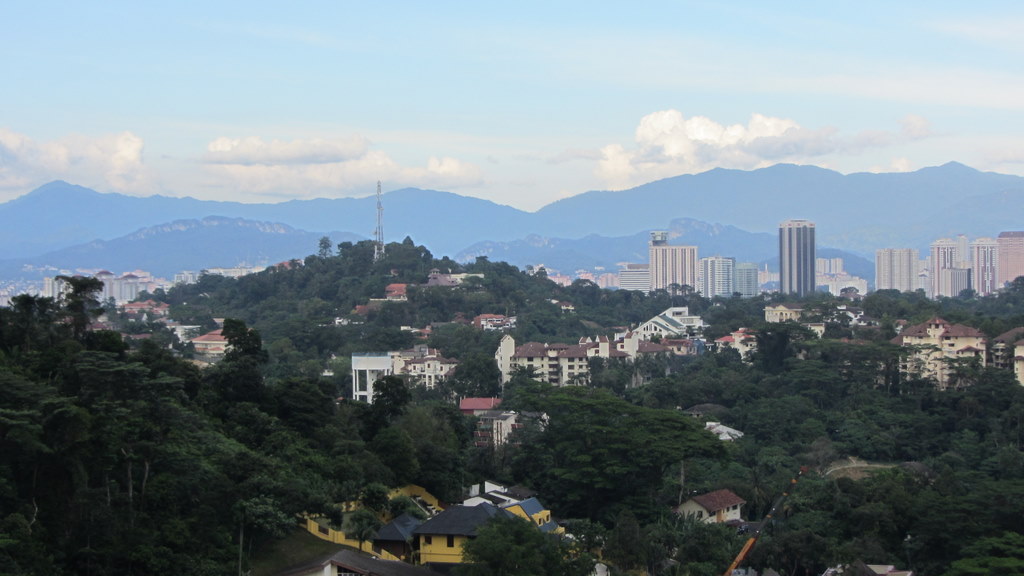 We’ve been in Kuala Lumpur for almost 3 weeks now and we love it! We never thought we’d say that about a big city because we don’t like concrete jungles, smog, and places where people are too busy to talk to you. But we’ve also never been in a city like Kuala Lumpur, and it has some really great things going for it. In fact, we could probably see ourselves settling here happily for quite some time.

Perhaps part of why we’re enjoying it here so much is because we decided to splurge on a nice apartment with views overlooking some greenery on one side, and the cityscape on another side, including the famous Petronas Towers. We’ve found that having nice views, large windows, and nature close by help us feel more relaxed, reflective, and elevated, so it’s worth the expense to us. We’re paying RM 6,900 (roughly $2,220 USD) for one month in this 2 bedroom, 1800 sq ft apartment, which includes furniture, all utilities and Internet, cleaning service twice a week, and amenities like a swimming pool, gym, and playground. It’s also just a 10 minute walk to the train station and the Mid Valley Megamall with hundreds of shops, restaurants, and activities to choose from. Of course, this would be much cheaper if we committed to a year lease, and maybe we’ll come back and do just that. Here’s the view from our master bedroom.

And the night view out our bathroom window.

The only thing our apartment lacks is decent kitchenware. We have the basics: an oven, a microwave and a small refrigerator/freezer. But we only have four plates and four cups, no blender, and not much in the way of pots and pans, beaters and other utensils. So we still haven’t been doing much cooking. We’ve been buying a lot of fruit, though, and we try to at least eat breakfast at home because most places here don’t open until 10am anyway. Fortunately, we also found that we can order food in from a variety of restaurants via http://roomservice.com.my. It’s been great for those days when we don’t feel like going out, but don’t really want to cook either. Who needs a private chef?

Our first few days here were just spent looking for a place to live, and our first week here, the girls were involved in a fun technology day camp where they made computer animations, stop-motion video, and learned the basics of engineering with legos.

Kuala Lumpur doesn’t feel as hot as Penang. That’s probably because it’s much less humid, being further from the ocean. But it’s still hot when the sun is out. As for traffic, despite rumors we’d heard, we found the drivers to be quite courteous, at least compared to Costa Rica and Penang. But the roads themselves are often crowded with cars, and because of how they’re laid out, it can take a long time to go short distances. Fortunately, Kuala Lumpur has an excellent train system every bit as developed as the one in Japan (although not quite as expansive — it’s just for getting around the city). We haven’t tried the buses yet, but we hear they’re nice as well, and very cheap.

One of the major attractions here that surprised us has been the shopping malls. Wait, malls? Seriously? Yeah, we’ve never really enjoyed malls or shopping, and certainly wouldn’t think to go there just for “fun.” But these malls are different. First, they’re massive! Usually at least 5 stories high, and with hundreds of shops each, selling lots of unique items we’ve never seen before, restaurants with every type of food you can imagine, and even activities like ice skating, laser tag, bowling, and movie theaters. One of the more spectacular malls, Sunway Pyramid, follows an Egyptian theme with a giant pyramid and sphinx out front, and even has a ferris wheel inside!

Maybe we wouldn’t think the malls were so cool if we hadn’t arrived during the celebration of Chinese New Year, when the malls are decked to the hilt with red lanterns and golden dragons, and when there are regular free performances of Chinese acrobats, cultural dances, and musical artists to liven up the air. On the night of Chinese New Year, we also got treated to the most spectacular fireworks displays I’ve ever seen, and at eye level from our apartment window. It’s an amazing time to be here in Kuala Lumpur.

Unfortunately, the prices on everything are much higher than Penang, but I guess that’s what you get in a bigger city. Still, it’s very reasonable and probably cheaper than most other major cities in the world, especially the food prices.

Next post I’ll be writing about some of our outings around KL. Until then, enjoy the pictures and video below. This video includes some cool acrobatics and dance performances, fireworks, and lots of baby Aysia footage, as requested. :)