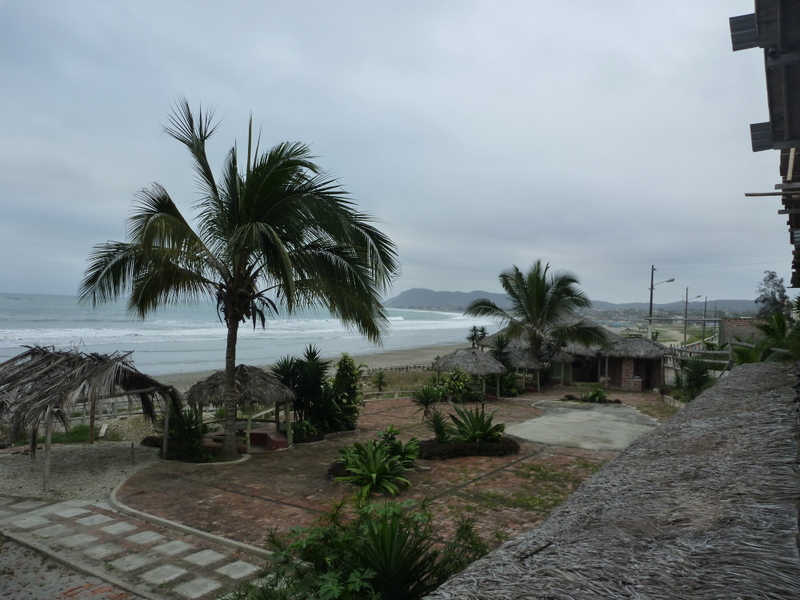 And what a welcome it has been! The day we arrived in Guayaquil, Ecuador was permeated with extreme political unrest. President Correa had just threatened to cut police benefits, so all the police were on strike. Many took advantage of the situation by robbing stores and banks, burning tires in the middle of the road, and marching in rallies to express their views. 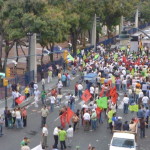 We were stuck in the airport for several hours, and all flights in and out of the country had been cancelled. Luckily or unluckily, ours was one of the last allowed to land. We did make it safely to our hotel that night, and fell asleep to the sound of mobs chanting angrily in Spanish outside our window. We didn’t plan to go outside much the next day.

As it turns out, we were stuck inside our hotel, Manso Boutique for several days, not because of political unrest, but because our daughter Emily developed a severe ear infection, and needed to rest in bed most of the day. Fortunately, the hotel also had its own restaurant, and we were able to eat without going far. We even had breakfast in our room, thanks to the kind staff. After a few days of this, without too much improvement on Emily’s part, we found out that someone at the hotel had an uncle who is a pediatrician. He offered to drive an hour to visit Emily at the hotel, and gave her hope, as well as a prescription that has been helping her feel a little better since. He charged $70 for the service (including 2 1/2 hours of his time), and the medication was a mere $8 at the local pharmacy. 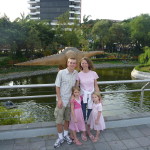 On Malecon in Guayaquil

Once Emily was feeling well enough, we ventured out for a walk along the Malecon 2000, a walkway that stretches along the wide river feeding into the ocean. The Malecon is filled with shops and restaurants, artists selling their paintings, ships in the harbor, playgrounds (unfortunately all closed for repairs), a botanical area with large dinosaur statues (a temporary exhibit that was also closed), and even an iMax theater. Marie even found a restaurant that served Macaroni & Cheese, which she’s been wanting for weeks. Our favorite discovery on the Malecon, however, was Penguino ice cream, which it appears has taken over most of Ecuador, as their logo can be seen on everything from city garbage cans and city welcome signs, to billboards and tiny shops in the middle of nowhere. But I’m glad because the ice cream is superb – the best I’ve had in a long time. We’ve been buying us each one of their $1 cones just about every chance we get.

Also in Guayaquil, we took the chance to see Parque Historico (Historic Park) which has a walkable zoo full of native animals, plants and trees from different climate zones, and a reconstruction of colonial Ecuadorian buildings. It was a free visit for us – although I’m not sure it’s always free, since there was a ticket booth, but it was free that day, and we enjoyed it immensely. It’s clean and well kept up, and you get to be very close to some of the animals. They had parrots, macaws, monkeys, crocodiles, and tapir, just to name a few.

Getting out of Guayaquil 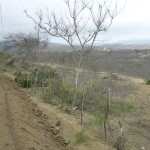 Once we had our fill of Guayaquil, we decided to journey out to see other nearby parts of Ecuador. We rented a small car for the journey, along with a necessary GPS, and headed for the beach town of Salinas, which had been recommended to us. The scenery was mostly dusty and dry, with a few cactus trees, sage brush, and another type of squatty tree that reminds me of Dr. Suess. I’m sure it all looks much better in the rainy season when there are some leaves on the trees, but everything looked very dead, flat, and unpleasant to us.

Along the way, we stopped at a great restaurant who’s logo featured an ostrich standing on top of a hamburger. We discovered that this was in fact an ostrich restaurant, with some live ostrich poking around the property as well. So we all got to try ostrich for lunch, and yes I did enjoy my chewy ostrich sandwich. They also sold other fresh items there, such as jam, salsas, and fruit juice, which was some of the best I’ve ever tasted. I got the passion fruit juice, and it was so tangy and fresh and wonderful! Jen’s guava was fantastic as well. Despite the hoards of flies at the restaurant, I would definitely go back. The restaurant owner even gave us some helpful maps and tips (and his phone number) to help us on the rest of our journey. 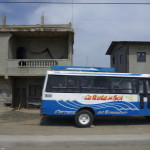 We made it to Salinas that afternoon, and were extremely underwhelmed. Unfortunately, what we saw in Salinas was also a precursor to the rest of our southwestern Ecuador journey. Half of the houses look like they were never completed, and the other half look like they were abandoned decades ago. Except, they’re actually being lived in now. Imagine an unpainted cement block house held up with rotting wooden posts, and rebar sticking out the top. Inside is dirt floors and fading colored cloths to cover the door frames and windows (no glass). Laundry is drying on the line outside, hanging over the dusty sand. Then you notice a woman sticking her head out the window hole talking on a cell phone. It’s a typical picture in these towns.

While the poverty seems extreme, and cleanliness and order are hard to find, what these towns do have going for them is the beach: smooth white sand and clear blue-green waters.While many of the roads in Salinas are not paved, the town does actually have a relatively decent street right in front of the beach, despite being taken over by high rise hotels and apartments. We stayed at a little hostel called Cocos, which had nice rooms, hot water, and a TV. The Internet only worked in the restaurant area, but after checking out several other hotels, I think we were lucky to find any place with Internet at all. Speaking of which, every connection we’ve found in Ecuador has been painfully slow and unreliable. 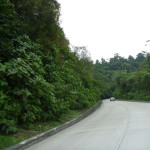 We didn’t really take the opportunity to play at the beach because the doctor said Emily can’t put her head under water yet, and the cloud cover made the temperature a little cool. Plus, we wanted to get on with our journey and find a more beautiful part of Ecuador to spend our time in.

The next day, we continued our journey and continued to be shocked at the landscape. Most of it was dry and dusty, but once or twice we hit a patch of lush, tropical green rainforest that lasted for about 5-10 minutes. No towns existed near the green areas, unfortunately, but we were amazed that there could be such change in the landscape in such a short amount of time, without much change in elevation. It gave us hope that something more beautiful might lie ahead. We also found it interesting how ugly a run-down old house can look when surrounded by dirt and dust, but how the same house can appear intriguing and even desirable when surrounded by thick jungle foliage.

The most tourist-friendly town we passed through on our journey was Montañitas, which had a few streets of restaurants and shops, and a few hostels. We stopped there for ice cream (yay Penguino!) and let the girls each pick a snack for the drive ahead. 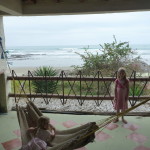 That night, we made it up to Puerto Cayo, a very small dry town with two or three abandoned-looking hotels, and a nice beach. It was raining a little during our time there, though, and was even a little chilly, so again, we didn’t go to the beach. We figured we’d have plenty of beach time at Galapagos the following week anyway.

We stayed in Hotel Puerto Cayo for $40/night which included a large room and a balcony with a hammock overlooking a beautiful ocean view. But it was very run down and deserted. I think we were the only guests, and there was only one staff member running the place. There was of course no Internet, but we weren’t expecting much. The hotel looked like it had been built 100 years ago, and the very ragged towels and curtains looked from about that era as well. Out of curiosity, I asked how old the building was, and was shocked to learn it was only 30 years old. I don’t know how it’s possible for a place to deteriorate so quickly. It actually had a lot of character, though; wide halls lit with Christmas lights decorating dead tree branches and driftwood, tiled floors and tilted walls giving the charm of some ancient castle. The bed frames were poured cement on the floor with mattresses placed on top of them. There was melted wax from candles on the shelves, and paint chipping off all the walls. I barely managed to get the door to our room to stay shut. But it was kind of fun, and a reasonably comfortable place to sleep, except for the bedbug bites which we discovered the following day, mostly on Marie. 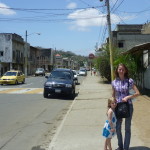 Looking out from the balcony, you could see what looked like used to be a beautiful patio and swimming pool, now filled to the brim with cement. After eating cheese soup, patacones, and shrimp in a small restaurant in town for $7, we came back to the hotel and for entertainment, watched old Mr. Bean episodes on my laptop, which I’d downloaded before we left Costa Rica. All in all, Puerto Cayo, like many of the towns along the Ecuadorian coast, looks like it has a ton of potential for being a beautiful beach hub, but has a very long way to go. The next day, we continued on our journey up the coast to the larger city of Manta, which we quickly drove through and left.

We had planned to go all the way up to Canoa, but decided these towns just weren’t our thing, and the girls were especially tired of all the driving, so we turned and headed back down toward Guayaquil through the town of Jipijapa (pronounced “hippie-hoppa”), a name Jen figured just had to have a cool town attached to it. We made up songs about Jipijapa on the way there, just because it was so fun to say. It, too, was a small and dusty town, but we had lunch there for $5, which fed the whole family chicken, rice, soup, and drinks. After lunch, we saw a cute little yellow baby chick running and cheeping down the sidewalk until it was picked up by a woman, presumably to take it back to its home – a fun scene you wouldn’t catch in most large cities.

We drove the rest of the way back to Guayaquil that afternoon, and stayed in Hotel Manso again until our flight to the Galapagos on Thursday. Check out the video and photos below.

On Malecon in Guayaquil

Some houses in Salinas