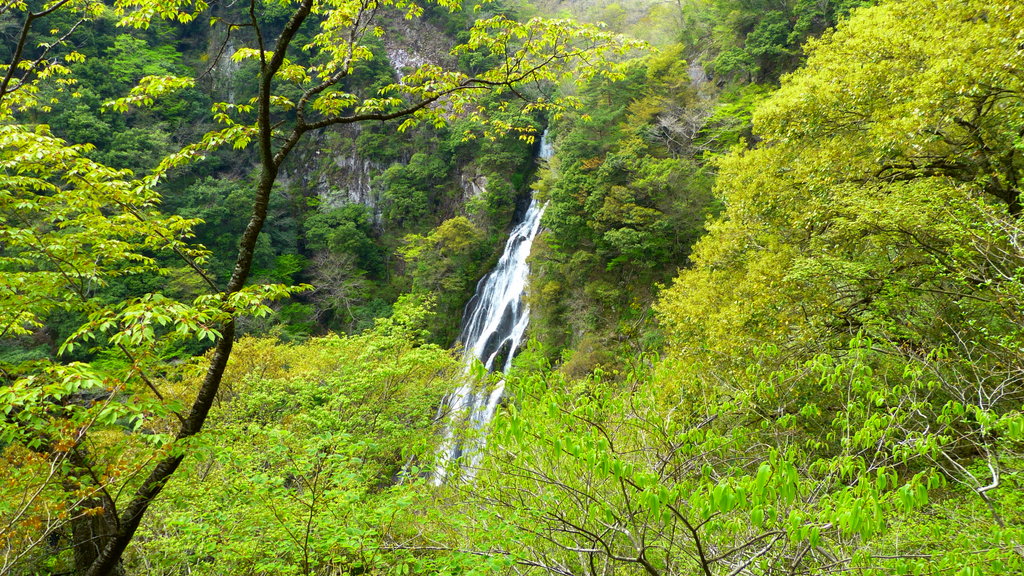 We’ve thoroughly enjoyed our time in Japan. It’s now Emily’s favorite country. Jen wants to live here, at least during the warm months. And we all love the food, the nature, the feeling of safety, and the interesting cultural aspects that make Japan unique. Despite the high cost, it’s pretty safe to say we’ll be returning here at some point, provided Fukushima doesn’t make the place uninhabitable with further disasters. At least wind currents don’t blow toward Osaka from there.

I’ve already written a little about how much we liked Habikino, but I have more pictures to show and more stories to tell about some fun activities we did in the region during our 5 week stay. Here are the highlights.

River in Yubara -- can you see the onsen?

About two hours by car from Osaka, past tranquil mountain towns and beautiful scenery lies the quaint town of Yubara, home to one of Japan’s last remaining family (co-ed) nude hot springs. Now before you start thinking anything kinky, realize that public baths are normal and respectable in Japan, and have been a daily practice in some towns for centuries. These days, most hot springs in the cities have had buildings built around them, with rooms to separate men and women, and they charge a fee. As for this particular spring, it’s right next to a serene river, surrounded by mountains, is completely free, and has three natural pools of differing temperatures. And some people do cover up when not in the water.

We actually made this trip twice with a couple different groups because we enjoyed it so much. Both times, we also camped in tents at a nearby campground — a first for our girls who have always wanted to sleep in a tent.

We also visited nearby waterfalls, and on one trip, stopped at the beach on the Japan Sea to play in the sand for a bit. A big thanks to Lawrence for organizing everything associated with these trips and for the stimulating philosophical conversations along the way.

Kids at the beach (Japan Sea)

In a neighborhood not too far from Habikino we went to a lantern festival at a local park. They had music, dancing, food, carnival games, and thousands of candle-lit lanterns laid out on the ground to form various words and shapes. We also visited the nearby Buddhist temples and their gardens, and learned that the area used to be one big temple complex. It was a fun local event we were glad we could attend.

One day, we took a trip to downtown Osaka to meet John Bardos, who runs JetSetCitizen.com and who interviewed me a few years ago about our travels and business. He and Motoko showed us around the town, where they’ve spent a lot of time in years past, and we browsed through some shops together while chatting about life. With all the noise and the concrete, I’m reminded again about how much I don’t want to live in a city, but they are fun to visit every once in a while.

Go Carts in the Park

Thanks to Lawrence, we had plenty of opportunities to meet new people and make friends with all the barbecues, gatherings at parks, and cherry blossom watching parties he invited us to. It was a lot of fun and always an enjoyable way to spend an afternoon. At one of the parks, there was a go-cart track, and the girls and I enjoyed taking a ride together.

Most of the time, however, we just hung out at “home.” I started a consulting business. Jen and I thought and wrote a lot. The kids got addicted to Minecraft and drawing art on the iPad. And when the weather was warm, we enjoyed taking bike rides together through the rice fields or to Baskin Robbins for a delicious treat.

Now it’s back to Bali, where we’ll be staying for a whole year, minus a few visa runs to neighboring countries. We’re going to miss you Japan, but we’ll take lots of good memories with us on our way. Here are some video clips and more pictures from our time here.