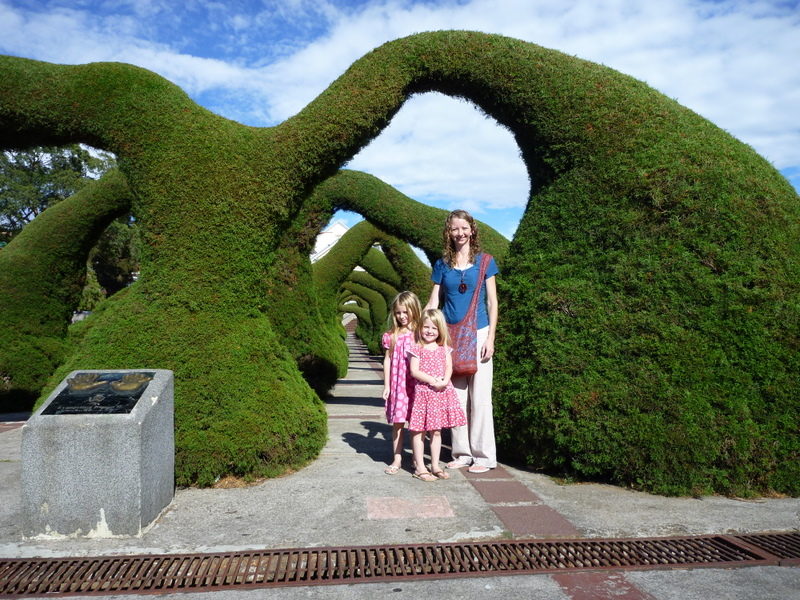 Today we decided to take advantage of having a car (yes, we finally got one!), so this afternoon we drove to a nearby town called Zarcero. It’s about an hour away from our house in Grecia, and has some beautiful topiary gardens in its central park reminiscent of Dr. Seuss trees.

On the way there, Emily was getting a little car sick, so we stopped in the town of Sarchí, famous for its painted ox carts and high quality wooden furniture, to look around at a souvenir shop there. It had some really beautiful pieces, and the girls enjoyed seeing all the different things made out of wood, from jewelry boxes to animal toys that move. 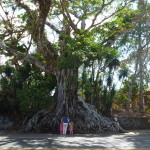 Continuing on our journey, we passed a giant tree on the side of the road on the way out of Naranjo that I just had to turn around and get a picture of. Wow! What a tree!

We stopped for lunch at a great restaurant in between Naranjo and Zarcero, called El Mirador. It’s a restaurant with beautiful views overlooking the valley. The service was surprisingly fast. We all got our food in under 5 minutes, it seemed, and it tasted great! It’s mostly typical Costa Rican food. Although I had a Cantonese-style dish kind of like ham-fried rice. Jen had ceviche, Emily had fried fish, and Marie had chicken fingers. Prices were all around $3-6/plate. And the fresh Cas and Guayabana juice were only about 90 cents each. What a deal! They had a telescope there as well that you could put a quarter in (yes, a US quarter) to look more closely at the scenery, which we did. Beautiful. 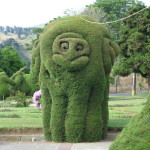 In Zarcero, we found a parking spot right in front of the park (free parking, of course). What an awesome place! It was so fun to walk around the interesting topiary, and smell the fresh pine. There are so many interesting designs, as well as little tunnels and places to play in. They’re remodeling the adjacent Catholic church right now, but we could still go inside. It’s quite a beautiful building with a skillfully painted ceiling and murals.

One other bonus to Zarcero central park is a children’s playground – the kind with swings and slides, and even a basketball court! This is the first time we’ve been able to play at a playground since we’ve been here. I think there is only one public playground in all of Grecia, and it’s pretty run down. This one’s in pretty bad shape, too, though, as you will see from the video below. But the girls were still happy to swing for a few minutes. 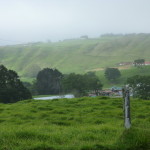 We had read on-line that there is a thermal pool in Zarcero, too, which we found. But unfortunately, it closes at 3:00pm and we got there at 4. Oh well, maybe next time. So we decided to take a little drive through Zarcero just to explore. It’s really a cute little town, with just a single main street of shops. We drove up in the hills, following the signs to Catarata del Toro, a 300 ft waterfall which we knew we wouldn’t have time to see today. But we saw some gorgeous scenery, and after about 30 minutes of winding through the hills, we came to a small town that was having a fiesta. So we stopped to check it out. 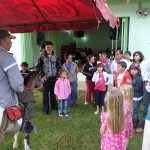 Kids at the fiesta

It was a little town party. They had a horse and a pony to ride, lots of food, and plenty of kids playing. We chatted with some friendly people there, then gave in to the girls pleading to be able to ride the pony. They really enjoyed it. Then the owner decided to give Jen a free ride on the horse. It’s the largest horse she’s ever ridden. We were pretty full from dinner, so didn’t try any of the food at the fiesta. It was also a little bit cold. The air was misty, which felt good, but it’s definitely the coldest we’ve been in Costa Rica yet – a light jacket or sweater would have been helpful there.

We wanted to make it back before dark so we headed home after saying goodbye to our new friends. Emily was pretty sick on the way back, and finally threw up in a gutter in Naranjo, but of course felt much better afterward. We stopped again at Sarchí and had ice cream and walked around Sarchí central park, where they have the largest ox cart in the world. By this time it was dark, though, and I left the camera in the car, so didn’t get a picture.

It was a very fun afternoon, and so nice to be able to spend time with the family out exploring new places.

Emily on a pony

Marie on a pony

Jen on the horse

Kids at the fiesta