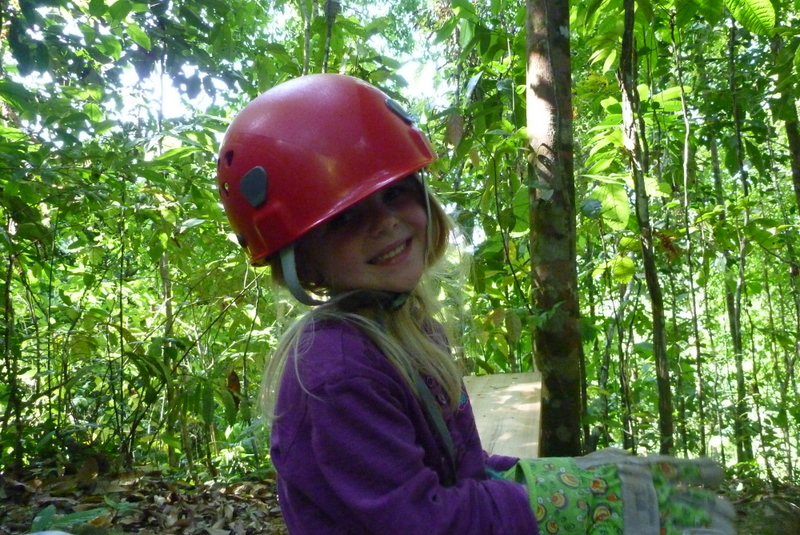 We’ve packed a lot of fun into the past couple days, and have even more planned for this week. We’re taking advantage of our time at the beach, as well as having a car – and we’re loving it! 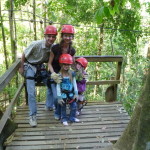 We ended our time in Dominical with a Canopy Tour (zip-line) at Hacienda Barú. They had 15 stations and we got to zip 8 times! It’s one of the more tame canopy tours, which was good for the girls, who were both brave enough to try it on their own (Marie went with Mom & Dad the first few times before she worked up the courage).

It was a blast! There’s nothing like soaring 150 feet above the rainforest floor. It’s beautiful and exhilarating! Our guide also spotted a large sloth in the trees, as well as demonstrated how soldier ants can work as temporary stitches for wounds. Interesting!

After that, we had lunch and then explored a little butterfly farm they had at Hacienda Barú. They even had our favorite – the blue morpho!

On to Manuel Antonio

Then we drove from Dominical to Manuel Antonio, about a 45-minute drive, through lovely groves of trees and what we think were pineapple farms. We drove all the way to Manuel Antonio Hotel, recommended to us by Denny. Unfortunately, they were all booked (it’s the weekend), but the receptionist found us a room at another nearby hotel, Verde Mar. They had one room available with a queen bed, and they brought in a roller bed for us. It was very tight quarters, but worked.

Our biggest complaint was that it was so hot! If only we had known there was an air conditioning unit in the bathroom, we would have had it on the whole time! Unfortunately, we didn’t discover that fact until the next morning after our showers and about an hour before we checked out. Oh well… 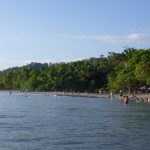 After melting in our hotel after a long drive, the girls finally convinced us to go swimming. Once we got in the pool, we cooled right off and had a great time! Before too long, we decided to go explore the beach as well, which was right behind the hotel. Once we got in the water, we didn’t want to leave! The ocean water was so nice and warm, and the sand was so clean and nice – and just sand – no garbage, rocks, or even fish – all the way out into the waves! I maybe felt a twig or two the whole time we were there – oh and a nice leather hat someone must have just lost… I sent it back to shore. Hopefully the owner will find it.

We had fun for hours swimming in the ocean and riding the waves (as much as you can without a board). The sunset on the water was beautiful. You could see the colors reflecting on the surface and casting light onto the trees on the shore. Quite a sight! It was enhanced even more for me by the beauty of my wife standing in the middle of it.

I had our camera out for part of the time, but got tired of holding it and didn’t want to leave it on the shore, so I ran it back to our hotel so I could swim better. It’s supposed to be waterproof, but I thought it was best not to expose it to the elements unnecessarily. And I had a lot more fun once I put it away. But that also means you don’t get any sunset pictures. Sorry.

After it started getting dark we headed back for dinner. But first, we had another quick dip in the pool. And while we were swimming, we heard some very loud noises. It sounded like a big guy with a loudspeaker was saying “WHOOOOO!” repeatedly.

In a few moments, we spotted some howler monkeys up in the trees! There were probably about a dozen of them, including some babies, and we got to watch them walk and jump from one tree to another. It was quite a treat! I went to grab my camera and caught a glimpse of the last one on video. I read that Howler monkeys are the loudest animal in the world, and I believe it after hearing them. For their small size, they can really bellow.

Dining on the Coast 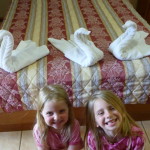 While swimming we also made some friends: Janet and her son Scott. We went to dinner with them that night and had a nice time.

The food here is very pricey though, no matter which restaurant you go to. Dominical and Manuel Antonio are very touristy towns – very fun, but hard to imagine living there. And everything seems at least twice as expensive as it is in Grecia. Cost is relative, though, so I’ll spell it out –  meals seems to start around USD $8-10 along the coast. (Of course, $30+/plate options exist.) Back in Grecia you can get a decent meal for $2-3/plate, and it’s hard to find anything over $12/plate. There are a couple very nice restaurants around that range, though.

Sunday we checked out of Verde Mar and went to church. We were given some very wrong directions by a hotel clerk, and ended up 20 minutes from where we needed to be. We drove back to the town and I stopped a man who looked like he might be going to church. He happened to be the Branch President, and he led us right there! It turns out we had just passed it without noticing – it was on quite a run-down little street.

We spent the afternoon relaxing in our hotel (Manuel Antonio Hotel), catching up on e-mail and blogs, and then had another expensive dinner that night (since that seems to be all there is). Tomorrow, we’re going horseback riding! Enjoy the video and pictures below.

Brandon in the trees

Marie at the beach

Playing in the waves

Jen in the waves

Brandon in the water