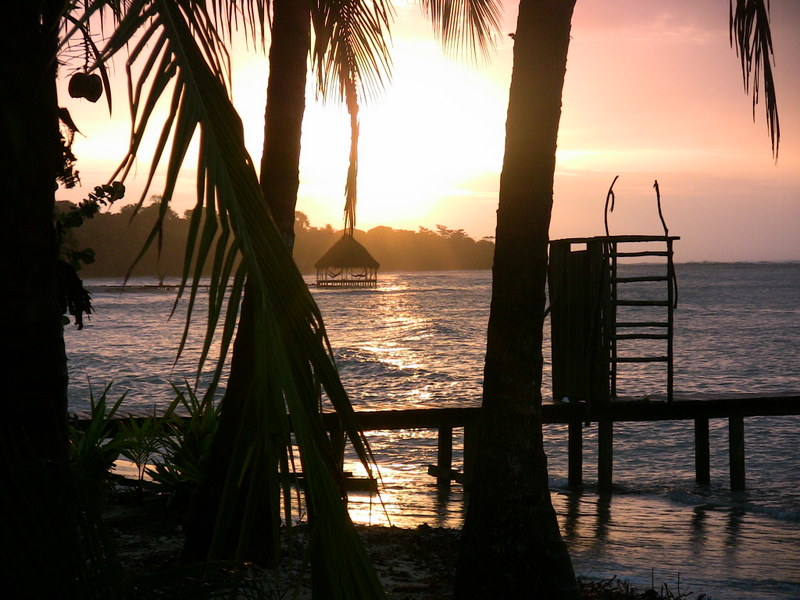 Yesterday, we bid goodbye to Bocas on a half-rainy, half-sunny day, and headed back to Panama City for another two nights before coming back home to Utah. We had a great time in Bocas, although being so far away from civilization for a week was a bit of a challenge for us, especially when we didn’t have power or water. But it was still a great experience.

Today was our last day in Panama. We fly home tomorrow!! We’re really going to miss this place. Jen even cried for a few minutes today (unusual for her) because she doesn’t want to leave. But there are things we miss at home too. Personally, I’m ready to get back to the familiar comforts of Utah for a while, and Marie wants to see her friend Evie and one of her stuffed animals. Emily seems to be content either way.

Girls at Benihana in Multiplaza

On our last day in Panama, we went to a mall downtown called Multiplaza, which has a lot of high-end fashion stores that were way out of our price range. We did splurge on a meal though, and took the girls to Benihana! :) It was a fun show and good food, but definitely not cheap. We also let the girls ride the merry-go-round and a little train that took them around the mall, and got them some ice cream. They enjoyed that. Jen and I had smoothies.

On the way back, we found a taxi driver named Johann who was excited to be able to practice his English a bit. He wants to start a transportation company helping tourists and businesses people get around in Panama. He’ll be taking us to the airport tomorrow, too.

At the pool in Albrook Inn

This time in Panama City, we’re staying at Albrook Inn, which is a really nice place. They have wifi, but again unfortunately, it doesn’t reach into my room so I have to come to their business center to use it. But they have a restaurant and a decent free breakfast, as well as a pool, which we enjoyed swimming in this morning. (Forgot to mention that.)

We took a walk around the neighborhood in the evening, and came to a park where the girls played for a while. It’s funny how they complain about their feet hurting from walking – until they see a park, and then they run with enthusiasm to play. Anyway, this walk was a nice way to end our day, and to end our stay in Panama. Last time we left Panama City, we were staying downtown, and were glad to get out of the noise and the busy-ness. This time, we’re happy to be back in civilization in a quieter neighborhood, and back to 50% humidity instead of 80% (even paper felt damp there :)). We do love all the birds around here, and the weather is great!

One thing I’ve also wanted to mention for a while but keep forgetting is the funny sound we often hear when driving, whether in our own car or a taxi. It’s the sound of a loud thunk that comes from the back-right seat of the car. Any car. Any guesses, car experts?

It’s actually the sound of Marie’s head bonking against the door! Marie can fall asleep in seconds once she gets in a car, and since we haven’t been using car seats in Panama, her head flops around a lot, and that’s a sound we heard all too often, sometimes followed by a whine or a little talking in her sleep, then she was back to dreamland. Once she’s asleep, it’s nearly impossible to wake her. (Although mentioning cookies or ice cream seems to have more effect than other methods).

Lastly, following in my sister’s footsteps of posting funny things her daughter says, I want to post a Marie-ism and an Emily-ism I heard today:

Marie: Daddy, why are you putting that stuff on your face? [It was sunblock]

Daddy: So I won’t get sunburned.

Marie: The sun’s not going to say, “Ha Ha Ha, I’m going to burn you!!” [imagine her sinister laugh]

Here’s one from Emily:

Emily: It will shrink!!!

Waves heaving themselves beyond their bounds in Bocas

At the pool in Albrook Inn

Girls at Benihana in Multiplaza